Jon's earlier post about the Acme Hour makes me miss the classic Looney Tunes even more than I do already. I remember the days before anybody ever heard of Cartoon Network, and when the Looney Tunes and Merrie Meoldies shorts were scattered all over the television landscape. Different channels aired different cartoons. Ted Turner owned the pre-1948 library, Nickelodeon had most of the Road Runner cartoons, black and whites and 1960's shorts. Then there was ABC, who aired mostly Bugs Bunny and Tweety cartoons, hence the title of their Saturday Morning-only showcase, "The Bugs Bunny and Tweety Show". Bugs n' Tweety was a staple on ABC for years, lasting from the mid 1980's until 2001. It was the only place to see many Tweety cartoons, the Sam Sheepdog/Ralph Wolf cartoons, and most of Chuck Jones' minor characters like Claude Cat and Charlie Dog.

Here is one of its earliest openings, from the late 80's, with the classic "This is It" title sequence from "The Bugs Bunny Show" reworked to add lights in the background and a top-hat and tuxedo look to the characters. It is included as an extra on one of the Looney Tunes Golden Collection DVDs...Volume 1 I believe.

It's been a long-standing legend that there was more footage produced of "Pudgie Parakeet", the cartoon that causes Robin Williams' character in "Mrs. Doubtfire" to lose his job. The animation was done by Chuck Jones, and though it's not a complete "short" per se, there IS more to it than what got used. See for yourself!

A follow-up to Matthew's post from yesterday. Here were the designs to the other Looney Tunes postage stamps (including the final one which Matthew forgot to mention: Porky Pig): 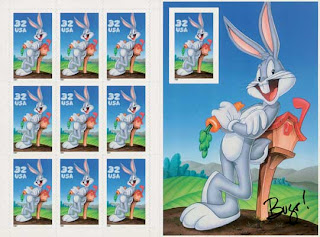 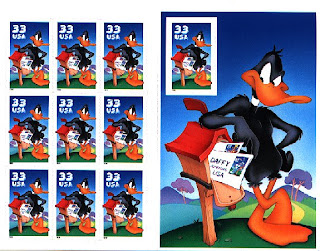 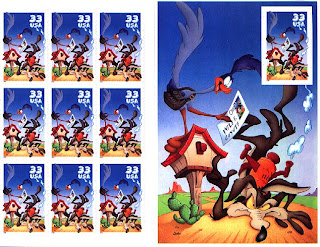 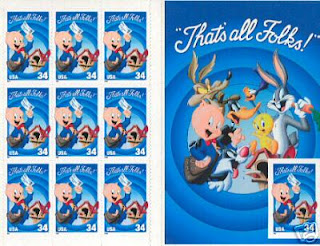 I tawt I taw a postage stamp

In 1997, Warner Bros. and the US Postal Service teamed up to produce a stamp featuring Bugs Bunny, to commemorate Bugs' iconic status and to encourage young stamp collectors. The stamp proved so successful that it rivalled the legendary Elvis Presley stamp in popularity, and spawned 3 follow-ups: Sylvester and Tweety, Daffy Duck, and Wile E. Coyote and Roadrunner. Here's a sheet of the Sylvester and Tweety stamp, released in 1998. Notice that stamps were cheaper then. By the time the Road Runner/Coyote stamp was released, the price was 33 cents. Stamps are now 41 cents. Ouch.

This promo for Cartoon Network's Acme Hour reminded me that even though I have a whole bunch of great classic shorts on DVD, I still miss seeing them on TV. I miss being able to turn on the TV and just watching an hour or so of random classic shorts without knowing what would show up. You just can't do that with DVD... well, not without a lot of hassle. I kind of wish somebody could invent a randomizer of some sort to shuffle cartoon shorts on DVD. Wouldn't it be neat to pop in a bunch of discs, press "play" and just let them go not knowing if you'd get a Bugs or a Road Runner or a Droopy or a Popeye coming up next?
Posted by Jon Cooke at 5:43 PM 8 comments:

Here's an idea I wish I'd thought of sooner...setting the classic Mel Blanc recording "Daffy Duck's Rhapsody" to footage of Daffy Duck himself. I think it turned out pretty well...

From the day somebody fell asleep on the PEZ dispenser assembly line... 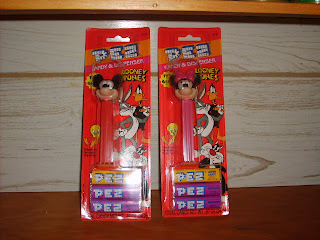 (Yes, these are real & I actually own these... found them at the grocery store a few years ago.)
Posted by Jon Cooke at 4:46 PM 2 comments:

Go For the Gold 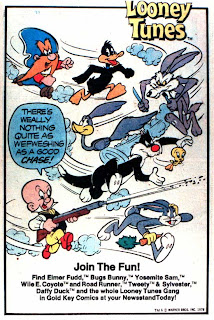 Here's one I've been wanting to do for a long time...my favorite Warner cartoon.

Matthew just posted his thoughts on the 1969 Cool Cat cartoon "Injun Trouble", now enjoy the original! Here is the classic 1938 Bob Clampett cartoon of the same name featuring Porky, Sloppy Moe ("I know something I won't tell!") and, of course, the infamous Injun Joe. Clampett would improve on this cartoon's plot and gags for "Wagon Heels" (1945) but the original is still pretty darn funny (especially the ending --- "Do 'um some more!"). I won't spoil anything else, cuz, well IT'S A SECRET!!!

Here's the final "classic" Warner Bros. cartoon ever made: "Injun Trouble" from 1969. Directed by Robert McKimson and starring Cool Cat, it's one of the best Cool Cat shorts and, quite possibly, the rarest Warner cartoon of all.

Remember when Cartoon Network was worth watching? Here's a promo that only aired for a few days, commmemorating their tenth anniversary. I doubt their 20th Anniversary will be near as much fun. You'll have to freeze-frame this to see everything, but it shows brief blips from just about all of their show openings and promos from that 10-year period. Apparently the classics were worth showing THEN.

In 1986, a series of public service announcements about the United States Constitution featuring the LT characters aired during ABC's Bugs Bunny & Tweety Show. We posted one featuring the Road Runner & Coyote (...who else??) a few months back, and here's one I remember seeing on one of those Saturday mornings of yesteryear: Petunia telling Porky how a woman can indeed become a United States President.

Sick of the Road Runner yet? Too bad!

Here's yet another bit of miscellaneous animation featuring the Road Runner and Wile E. Coyote. In 1966, CBS aired "The Road Runner Show", a compilation that, as I understand it, featured a few Jones classics and debuted the then-new Rudy Larriva shorts.

Robert McKimson directed several bumpers (I have no clue how many) with short gags like the Coyote playing tennis with a grenade and disguising himself as a Road Runner. These are largely lost, but somebody posted some to Youtube a while back. Enjoy.

Let's kick off the month of September with yet another batch of Road Runner commercials!

First, a 1979 public service announcement about obeying the rules and posted notices while operating motor vehicles in off-road or wilderness areas.

I saw this one posted over on J.E. Daniels' blog. A foreign car advertisement featuring the desert duo.