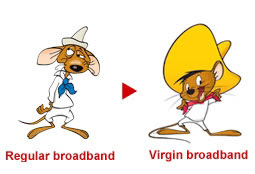 Here in the United States the Road Runner is used as the mascot for Time Warner Cable's high-speed internet service of the same name. Now in the UK, Virgin Media has just started using Speedy Gonzales in their new ad campaign for their super-fast broadband internet service. The first commercial is below and Virgin has posted an "interview" with Speedy here. 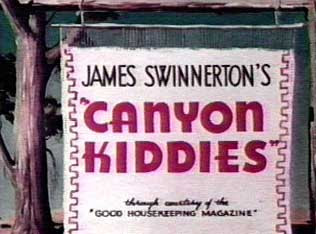 I had always known that the 1940 cartoon "The Mighty Hunters" featuring James Swinnerton's Canyon Kiddies characters was intended to be the first in a possible series. However, it wasn't until recently that I realized just how ambitious the original plans for this series were. Here is a brief write-up from Louella Parsons' Tells About Hollywood newspaper column from December 26, 1938:

Jimmy Swinnerton, cartoonist for 47 years and the creator of the famous "Canyon Kiddies," is headed for the movies. Leon Schlesinger, producer of the "Merrie Melodies" and "Looney Tunes," has signed Jimmie to a long-term contract which calls for 13 one-reel technicolor "Canyon Kiddies" annually.

Interesting that it was Marion Davies, who loves the funnies and reads every one of them, should first have suggested the possibilities of the Swinnerton cartoons to Leon. Jimmie and Mrs. Schlesinger leave Tuesday for New York for the remainder of the holidays.

In Leonard Maltin's Of Mice and Magic, director Chuck Jones warmly recalls of traveling to the Grand Canyon with Swinnerton, on their own dime, for inspiration for the cartoon. Swinnerton himself provided fifty oil paintings of the desert landscapes for use as backgrounds (a departure from the traditional watercolor backgrounds used in the normal cartoons of the time). This trip is confirmed in Martha Sigall's book, Living Life Inside the Lines, which includes an excerpt from the Schlesinger studio's in-house newspaper, The Exposure Sheet: 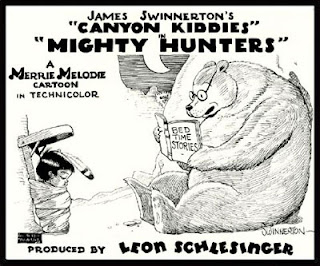 Due to the unusual backgrounds and customs in the new series of Canyon Kiddies Cartoons, James Swinnerton, Chuck Jones, and his story unit, left yesterday morning for the old Indian ruins of Arizona.

Mr. Schlesinger felt it was quite necessary for the department to be familiar with the general atmosphere of the country.

They took a 16 mm camera with which to capture, in color, the Indian dances, settings, and characters. They expect to gather enough material on the old Indian legends for the entire series of cartoons. (Have you ever heard of a cartoon studio going out on location?)

P.S. --- Tex Avery's story unit swear their next picture will have a Hawaiian background!!!

The one and only Canyon Kiddies cartoon was released in 1940. Why the plans for the ongoing series were abandoned, I can not say. Perhaps it was budget reasons or perhaps the Schlesinger crew were naturally moving away from this type of charming, yet Disney-esque, style of cartoon. After all, 1940 would also mark the birth of a superstar named Bugs Bunny. Enjoy the full cartoon below.

For more information, check out the following links:

The Bodega Bay Heritage Gallery has some background on Swinnerton's career and cartoons based on his work.

Larry T's blog has a post showing off some of the original Canyon Kiddies artwork done for Good Housekeeping magazine.
Posted by Jon Cooke at 5:14 AM 1 comment: