Just returned with this flea market find: two collector plates that the Franklin Mint put out in 1993 based on "The Scarlet Pumpernickel" and "Rabbit Seasoning". They put me back $15 each, with all the proceeds going to the local cat shelter (which made me feel less foolish for spending $30 on plates that will kill me if I ate food off of them). 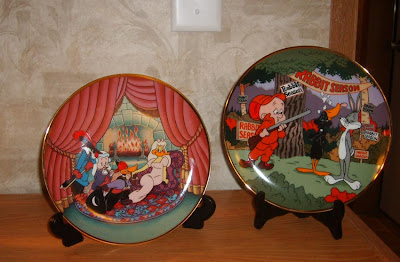 The "Pumpernickel" one still had its Certificate of Authenticity: 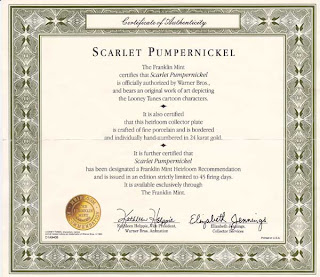 Does anyone know how many others were in this set? A quick Google search revealed there was also one based on "For Scent-imental Reasons".
Posted by Jon Cooke at 2:06 PM No comments:

A recent ebay auction offered a film print of Frank Tashlin's 1945 Merrie Melodie, "A Tale Of Two Mice". Sadly, nobody we know snagged it, and there were no images of the credits. There WAS an image of the title card, though! 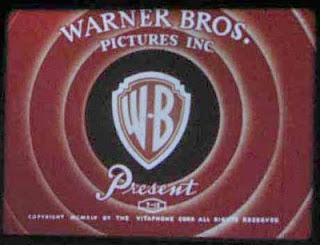 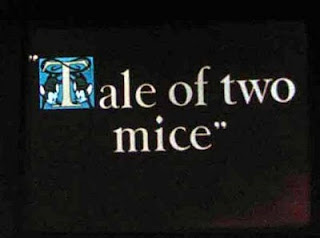 UPDATE (9/30/10): Here is another original title card that surfaced in a recent eBay auction. Coincidentally, it was from the second (and final) cartoon to star the mouse version of Abbott and Costello: Robert McKimson's "The Mouse-Merized Cat" (1946). The auction was for a 16mm copy of the cartoon in black-and-white (the original cartoon was in color, of course), but it still gives us a rare glimpse of the original title. - JHC 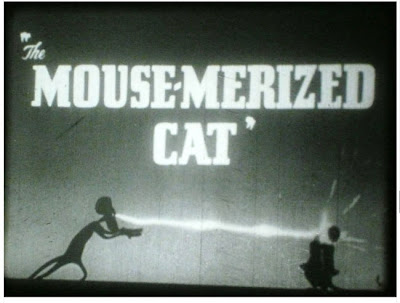 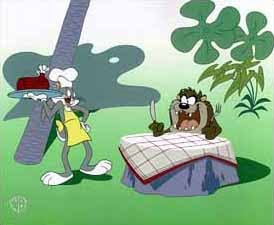 Taking a page from one of my favorite blogs, Yowp: Stuff About Early Hanna-Barbera Cartoons, I thought I would start presenting various odds and ends I have dug up while combing through various online newspaper archives. I have come across a few odd, interesting (to me, at least) and forgotten footnotes in Looney Tunes history. For instance, did you know of Bugs Bunny's failed attempt to break into the themed-restaurant business in the early 1980's (a la Chuck E. Cheese)? Neither did I.

HOLLYWOOD --- If your town doesn't have a Gadgets restaurant, chances are it will within the next year or two, offering an entirely new entertainment program along with steaks, hamburgers and pizzas.
Gadgets is a newly designed national franchise outfit involving Warner Bros. and other corporations with plans for a string of 150 eateries around the country.
So far only Springfield, Ohio and Baltimore have Gadgets in full operation.
What distinguishes Gadgets from other chain restaurants, Howard Johnson for instance, is the entertainment factor.
Diners at Gadgets will see a completely automated 20-minute show every half hour or so featuring 8-foot robots with pre-recorded dialogue and songs.
But the robots are very special and familiar characters indeed: Bugs Bunny, Daffy Duck, Yosemite Sam, Porky Pig, Speedy Gonzales, Tweety Bird and Sylvester, Henery Hawk, Foghorn Leghorn, the Tasmanian Devil and other wackos from the Warner Bros. cartoon factory.
Those who have visited Disneyland are familiar with the autoanimatronics shows featured in the "America Sings" attractions at both theme parks. Gadgets' figures and shows might be compared to them.
The dialogue and music, including close harmony, were recorded by Mel Blanc, who has given voice to movie and TV animated cartoons for more than 45 years.
"Every restaurant will have 50 different entertainment programs, so there won't be a lot of repetition," Blanc said the other day.

What happened? I won't post the full text here (you can find it via this link), but an article the following July in Nation's Restaurant News painted a much less rosy picture about the Gadgets chain. There was behind-the-scene turmoil and high costs were rapidly killing the few existing locations.

Because of high development costs and demographics, Gadgets has altered its original concept of combining the ambience of an eating places and lounge for young adults with a family restaurant that features robotic cartoon characters on a stage. The new concept, Gadgets Cafe, is smaller and does not have the Looney Tunes show. Executives say the original concept will be used primarily as a growth vehicle overseas.

The cafe concept was rolled out because of space limitations, investment costs and demographics. Some locations were just not large enough to contain the separate dining rooms that feature the stage shows. And in some markets the demographic base was not families with young children--the prime market for the dinner with Looney Tunes--but young adults who preferred a bar atmosphere with current music.

Even in the full-sized Gadgets units, the stage shows have been reduced in frequency to just two to three hours a day. This indicates the trend away from robotics in Gadgets as well as in other restaurant chains.

Gadgets began growing at a time when the interest in computerized animated shows in restaurants was going strong. Most of the companies that were doing well were pizza chains like Chuck E. Cheese's Pizza Time Theater and Showbiz Pizza Place, which have suffered great financial difficulties since then.

A search of the web didn't turn up anything else on Gadgets. No blurry photos of the giant robotic Looney Tunes characters, no fuzzy childhood memories posted on nostalgia-themed blogs. It sounds like they really put Mel to work on this idea, and it's a shame that a treasure-trove of audio of Blanc as the LT characters is now probably lost to the ages. If anyone has any more information, photos, etc of this short-lived venture leave us a comment or shoot us an e-mail at looneyblog ---at--- yahoo [dot] com.
Posted by Jon Cooke at 3:57 PM 8 comments: 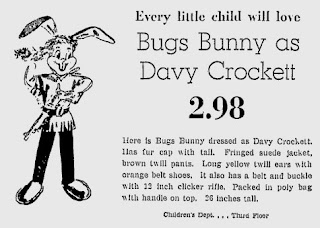 From an advertisement for Ivey's Department Store printed in the Daytona Beach Morning Journal (Wed. June 1, 1955).
Posted by Jon Cooke at 5:54 PM 1 comment:

In our previous entry, we brought to your attention the new Looney Tunes voice feature on TomTom GPS systems. The voices are provided by Joe Alaskey, who has been providing voices for the Warner Bros. characters since the early 1990's. We've done posts on Alaskey before, but here's a fascinating and hilarious glimpse at his early career as a stand-up comic and impressionist. Don Knotts as Abraham Lincoln? Woody Allen as William Shatner? It gets crazier from there!

Posted by Matthew Hunter at 7:42 PM No comments:

Should Have Taken That Left Turn at Albuquerque...

I admit it, we've been seriously slacking on posting the latest Looney Tunes news flashes here lately... examples: the 3D Roadrunner cartoons, the new Cartoon Network series, the CGI Bugs Bunny movie, and the new Looney Tunes Super Stars DVDs with cartoons in glorious faux-widescreen format. How about the CGI Speedy Gonzales movie starring the voice of George Lopez? No, it was this recent news item that I found too bizarre to pass up posting about: You can now have Bugs Bunny direct you through unfamiliar roads.

Warner Brothers and TomTom have released Looney Tunes voices you can download to your TomTom GPS devices. Bugs and Yosemite Sam are available now... complete with stock Carl Stalling music cues. Daffy, Sylvester, and Pepe Le Pew are coming soon. Click the above link to listen to some samples.
Posted by Jon Cooke at 6:02 AM 2 comments:

Speaking of cool YouTube videos, here's one I posted on the GoldenAgeCartoons Facebook page the other day. I felt it was worth posting here as well. YouTube user xrstoph created this side-by-side comparison video featuring footage from Bob Clampett's classic "Porky in Wackyland" beside the footage from Friz Freleng's 1949 remake, "Dough For the Do-Do". Check it out.

A dedicated Looney Tunes fan on YouTube known as radiobov created this neat video featuring a screenshot from each and every Warner Bros. cartoon from 1930 to 1969 set to a medley of various versions of "The Merry-Go-Round Broke Down". It's an interesting six minute look at the evolution of the cartoons, styles and characters.

The United States isn't the only place where the Looney Tunes characters are promoting a healthy/active lifestyle. In France, you can now find "Looney Tunes Active" toys inside McDonald's Happy Meals... wait. What? Here's the now-airing ad featuring CGI versions of Tweety, Daffy and Bugs shooting some hoops with an anthropomorphic Happy Meal box. 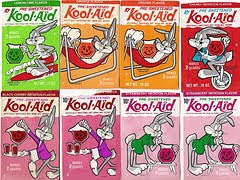 It's been kind of quiet around here lately. I am going to make an attempt to clean up the dust and cobwebs here on Misce-Looney-ous and post a bit more often. What better way to get back into the swing of things than with one of our favorite topics around here (second only to Road Runner commercials): Bugs Bunny shilling for powdered drink mixes. Here's a 1960s advertisement for pre-sweetened Kool-Aid featuring that wabbit on the package... much to Elmer's disbelief.