I've always thought the Dave Matthews Band was one of the greatest rock bands of all time. Those who know the groups' music need no explanation. They're releasing a new album in June, but have a new "single" from it out as of a couple weeks ago.

Sadly, their saxophonist, Leroi Moore, passed away this past year, and as I understand it the new album is dedicated to him. So is my Looney Tunes clip video of the new song, "Funny the Way It Is". I just felt compelled to create this, as Dave Matthews' lyrics are so vivid. I hope you will enjoy this music video.

Also note that this is our blog's 400th post!

Our pal David Gerstien has started his own blog, David Gerstein's Ramapith: Prehistoric Pop Culture Blog and everyone here should go check it out. I am going to assume topics will cover some his favorite characters (seen above in my hastily assembled collage). In fact, Misce-Looney-ous readers will enjoy his recent post about the comic strip adaption of "Bosko - Shipwrecked!".

In honor of the occasion, I am going to take the opportunity to post another track from the 1950's record Woody Woodpecker's Family Album. "Hopalong Oswald" features Mel Blanc providing the voice of Oswald's Uncle Jack Rabbit. Click here to download "Hopalong Oswald".

UPDATE --- Don't miss this amazing new post of David's where he uncovers the long "lost" ending to "Hare-um Scare-um"! I don't know how he plans to top that!
Posted by Jon Cooke at 1:54 PM 4 comments:

Well, might as well post this while it is still timely. This 2003 promo for the Acme Hour from Cartoon Network Latin America shows what happens when Wile E. switches from Acme to a generic brand.

We've covered the McDonald's Super Looney Tunes Happy Meal toys from 1991 here on the blog before. Now here's the commercial that promoted them:

You Can't Eat Without It

Jerry Beck over on Cartoon Brew mentioned recently how an unofficial homemade video of the Coyote catching the Road Runner has got some attention in the Latin American press. What would Wile E. do if he really caught the bird? Well, not much if he was all out of Heinz Ketchup! 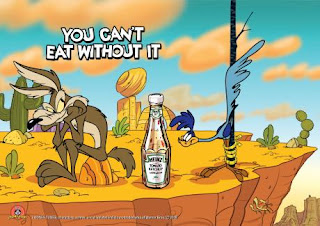 This is from a series of print ads from Egypt dated 2008. You can see all the Looney/Heinz ads on this site. Without any ketchup, Sylvester refuses to eat Tweety, Yosemite Sam can't eat Daffy, Bugs doesn't know what to put on his carrots, and Taz won't eat his... trash can full of rotten fish (huh???).
Posted by Jon Cooke at 7:13 AM 1 comment:

I had seen this product, part of Safeway's "Eating Right" products line, before, and then it disappeared before I could pick it up. Thankfully it has since reappeared! Other than the fact that the apple slices are rather bland and the peanut butter is very gloppy and messy to eat, I loved the artwork of Wile E. Coyote as a scientist! Perhaps this will tide him over until he finally manages to snag that meal he's always wanted...
Posted by Matthew Hunter at 6:45 PM 4 comments:

Here's another YouTube find. Since I don't know anything else about it besides the description, I will quote that. It was uploaded by a YouTube user called "ikespaceman" who says: "At the Blackstump Festival in Australia in 1993 the Belvedere Blues Band performed the soundtrack to the famous 1957 cartoon Three Little Bops. The performance was recorded through the desk and I was recently given a copy, so I thought I'd edit the sound to the pictures. Hope you like it."

I have to admit, it is impressive that they played through the entire soundtrack live. Minor nitpick is that they changed the punchline at the end of the short. Check it out:

This is pretty neat. Someone has posted a video of the "Yosemite Sam and the Gold River Adventure" dark ride at Six Flags Over Texas. The ride, which opened in 1992, features audio animatronic versions of the LT gang in a western-themed plotline. Look for Bugs, Elmer, Daffy, the Road Runner and Coyote, Porky, Speedy and others to pop up. It's almost like being there.

If there's one thing we've discovered over the course of running this blog, it's the fact that the Road Runner and Wile E. Coyote may be the most-used characters in the Warner Bros. canon for commercials and other "Misce-Looneyous" material. Here are a couple of fun bits I'll bet a lot of readers here have never seen before.

First up, here's a special that Cartoon Network made back when they showed Looney Tunes (seems like forever ago, doesn't it?) They actually got the major network football pre-game commentators (Len Dawson,Chris Collinsworth, Nick Buoniconti and Jerry Glanville, who is more cartoonish than Wile E. himself!) to do commentary on a marathon of Road Runner cartoons back in 2000. It was, of course, part of a yearly series of "Big Game" marathons designed to compete with the Super Bowl. They also did "Tom Vs. Jerry", 'Sylvester vs. Tweety" and "Bugs vs. Daffy" in the same fashion. Sadly, the clips we found only included the "pre-game" stuff...there was also a full cartoon with football-style play-by-play commentary by John Madden and Pat Summerall! But enjoy what we DID find:

And now for more Road Runner. Did you buy the "Looney Tunes Golden Collection: Volume 2" DVD set a few years ago? No? Shame on you! In fact, (expletive deleted) you! But if you want to own the original "Adventures of the Roadrunner" on DVD, that is where you will find it. This was originally a TV pilot created in 1962, shortly before Chuck Jones was let go from Warner Bros. for moonlighting on a UPA-produced feature film called "Gay Purr-ee". The pilot was not used for TV after all, instead it was released as a featurette in theaters, and later re-edited and re-scored into three shorts. The first of these, "To Beep or Not To Beep", was released theatrically, the other two, "Zip Zip Hooray" and "Roadrunner A Go Go" done for TV. The difference is, there is footage in the pilot that was never used in the three shorts, and Milt Franklyn died before the shorts were edited, so the shorts were redubbed by Bill Lava. You'll recognize a lot of this footage if you have seen the three shorts, but there is much more to it. If you don't own Golden Collection 2, go find a copy and buy it!