Thanks to GAC Forums user "FlapperPrower" for alerting us to a new Geico car insurance commercial featuring Elmer Fudd:

While I was home in Fort Worth, Texas for Christmas week, I stopped by the Montgomery Street Antique Mall, one of my favorite places to go for old, oddball cartoon memorabilia. I ran across a collection of stuff manned by an older woman in a wheelchair who collected cartoon cat stuff, especially Sylvester. I told her I was interested in the Sylvester figure in the picture below. She was asking 20 dollars for it, and I told her that was a little more than I wanted to pay for it, but that I was a huge Sylvester fan and was already going to buy another of her items. She made a deal and gave me both items for 15 bucks.

This vinyl figure, which has a rotating head, poseable arms and a hat and vest, was made by the Applause company in 1990, and is obviously inspired by both the 1960's "Bugs Bunny Show" and the Dakin Company WB cartoon figures of the same era. As an added plus, he can either wear his hat, or hold it in a "tipping" pose, as I photographed him. 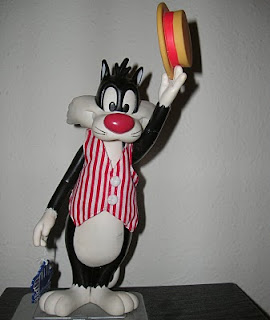 Back in 2007, I did a lengthy post on the history of Nabisco's Bugs Bunny cookies. In that post I mentioned in passing how kids could mail away for a clubhouse kit. I had never actually seen one before... until now. We got an e-mail from Mark Hosking who found our blog while looking for more information about the Bugs clubhouse. He has one in mint condition from 1982 available on eBay as we speak. The thing is pretty impressive and huge. Yes, it was a lifesize cardboard clubhouse decorated with Looney Tunes characters. Check out the eBay link below for more pictures and even a YouTube video. 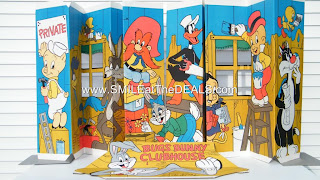 Time for some more yuletide cheer as our little Chuck Jones Christmas party continues. I have to admit, Jones' later stuff is starting to grow on me. Like the Chipmunks special, here's another Jones take on some existing characters. 1978's The Great Santa Claus Caper was the first of two TV specials Jones did that starred the dolls Raggedy Ann and Raggedy Andy (1979 saw the Halloween special, The Pumpkin Who Couldn't Smile). The story is pretty simple and clearly aimed at kids, but the highlight is a very Wile E. Coyote-esque wolf who plots to make Santa's workship more efficient by covering all the gifts in a substance he calls "Gloopstick". The crazy Gloopstick machine feels very Dr. Seuss-ish to me. The show is filled with the familiar voices of June Foray, Daws Butler, and Les Tremayne. I don't believe either of the Jones "Raggedy Ann" specials have been released onto DVD.

In 1953, Mel Blanc recorded a novelty Christmas tune called "Christmas Tree". An adaptation of the old German teaching song "Schnitzelbank", it gave Blanc the opportunity to sing in the character of a crazy German professor. It inspired one kid named L. Rapchak. It inspired him so much, in fact, that 50 years later, he decided to create a Youtube video. The backstory he gives at the beginning explains the rest, but it's absolutely hysterical.

When you think of Alvin and the Chipmunks, the only things that usually come to mind are the original Christmas song that launched a million cornball records and bad cartoons. Most recently, they've made their way into bad CGI movies too! But not many people realize that in 1981, Chuck Jones lent his inimitable charm to a Christmas special featuring the musical rodent trio. In the 1970's and 1980's, Chuck Jones created a number of works for television that have been largely forgotten and underappreciated. As with the "Merry Cricket" special Jon drew attention to in our last entry, Jones took a break from his anarchic Looney Tunes past and focused on telling a good story with great animation. The result is a rarely-seen take on Alvin and the Chipmunks, but possibly the best of all.

Excuse the poor quality and overlap of the segments, but this is all I could find of this rare Holiday treat. Fans of the 1960's Chipmunk cartoons should keep an eye out for a dream sequence featuring the inventor Clyde Crashcup, who in Jones' interpretation looks a lot like Dan Backslide from the classic Merrie Melodie short "The Dover Boys"!

We all know Chuck Jones' classic TV special based on Dr. Seuss' How the Grinch Stole Christmas, but I thought it might be fun to revisit some of Jones' other Christmas-related cartoons during the next few days.

During the 1970s, Jones independently produced a few TV specials including the one below. 1973's A Very Merry Cricket is actually a sequel to an earlier Jones special A Cricket in Times Square based on the book by George Selden. Don't worry, if you haven't seen the first one, you'll get a recap in this. It features the voices of Les Tremayne and Mel Blanc and is actually quite charming.

Six of these Jones television specials (including all three "Cricket" cartoons) have been gathered on a single DVD release titled The Chuck Jones Collection.

Keeping up the Christmas theme we've got going here, I think it's appropriate to bring attention to this short from 1979. It was originally part of the "Bugs Bunny's Looney Christmas Tales" TV special, which can be found in its entirety on the Looney Tunes Golden Collection 5 DVD.

This short marked the first time anyone other than Robert McKimson (who passed away two years prior) had attempted to do a cartoon with the Tasmanian Devil. Friz Freleng stepped up to the plate and knocked one out of the park. While some of the animation is a little wonky, Freleng's wit and timing are still there, and Taz is put to good use as an accidental Santa Claus imposter. The fun of it lies with the idea of Bugs immediately seeing through Taz's disguise, but playing along anyway. The special isn't shown much anymore, in fact it will be shown on TV in its entirety for the first time in at least 5 years on Cartoon Network this month. But this particular short has been rerun many times over the years, and helped establish the once-obscure Taz as one of Warner bros.' most popular stars.

Here's a Portuguese car commercial featuring Sylvester and Tweety. Can't tell you much more about it than that, but it has some nice animation of "Titti e Silvestro". And you thought we were gonna post another Road Runner commercial, didn't you?

Here's one of the odder Looney Tunes Christmas related items I have stumbled across. You know those elaborate, expensive ceramic Christmas villages? Would you believe that the folks at Department 56 made a set of Looney Tunes characters you could plop down in the middle of your village? Needless to say, I didn't pay anywhere close to the $40.00 (!) retail price that they asked for these guys in 2001. I found it over the summer at a flea market for about $5, and have been hanging on to it until now to post here. 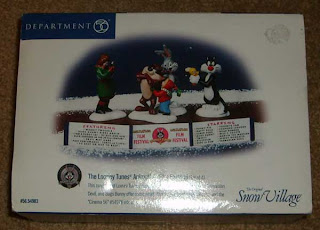 The craziest thing is, Bugs, Taz, Tweety & Sylvester come with this realistic kid and Mom (who is taking a picture of her child). I would think a quartet of random cartoon characters would look a little out of place in your Christmas village. Maybe these are supposed to be statues of the Looney Tunes and not the "real" Bugs, Tweety, etc. It isn't very clear. The set also came with a theater marquee (boasting a LT cartoon festival) that could fit onto a Department 56 movie theater (sold separately, of course).

The figures look nice. Here's a picture of my cat preparing to devour Sylvester. 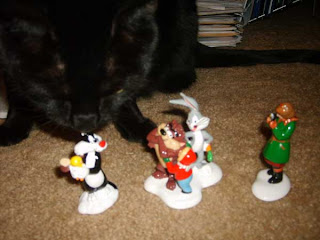 If Matthew's weakness is Looney Tunes PVC figures, I guess mine would be Looney Tunes Christmas ornaments. I dug out the ol' holiday decorations a couple days ago and snapped this group shot of most of my LT tree ornaments. Most of them were made by Hallmark over the years. It's hard to pick a favorite, but I really like the miniature replica of the vintage '50s "Porky's Lunch Wagon" lunch box (complete with thermos!) and the one with Bugs and Tweety eagerly watching Looney Tunes on their TV (it even plays a snippet of "Merrily We Roll Along"). You'll even notice this year's "Rabbit of Seville" ornament in there (I gave in and paid full price for it... instead of waiting until the post-Christmas clearance sales). 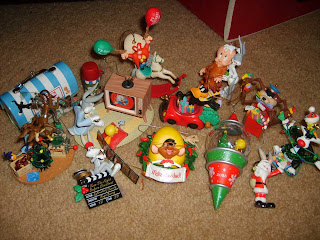 If you have a couple bucks to gamble, have a claw machine near you, and love Looney Tunes, keep a lookout! As reported previously, claw game company Sugar Loaf has been producing stuffed Looney Tunes character dolls...but on a grander scale than I thought! But that's not all! Other characters I have seen include:

Here's a Harman and Ising rarity featuring our old friend, Bosko. This was actually their first cartoon for MGM after leaving Warner Bros./Leon Schlesinger. This was also only one of two cartoons where Bosko retained the same design as in Harman & Ising's WB cartoons. What makes this cartoon interesting is that it is a pure cheater cartoon! Nearly every bit of footage is recycled from old WB Bosko cartoons. It feels like watching Bosko's "greatest hits" reel (in color!)... see if you can ID where H&I lifted the footage in 1934's "Bosko's Parlor Pranks":