Louvre Come Back to Me Commentary

Here's a look at one of Chuck Jones' overlooked classics.

Louvre Come Back to Me Commentary
Uploaded by MatthewHunter
Posted by Matthew Hunter at 8:52 PM 3 comments:

Here's my commentary on a really lousy later short by Alex Lovy.

This month has just flown by. I was originally planning to devote separate posts to all of the following, but instead I will be presenting them as one giant Thanksgiving-themed post. 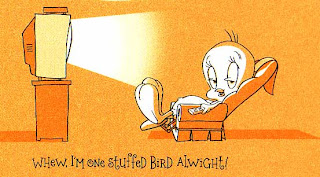 
There aren't that many animated Thanksgiving TV specials. However, the Looney Tunes gang can boast that they appeared in TWO different specials themed to the holiday. The first of the two was 1979's Bugs Bunny's Thanksgiving Diet. It's nothing really remarkable and at least it's not unwatchable like Bugs Bunny's Howl-o-Ween was. In new wraparound footage, Bugs is a diet doctor who gives advice to various patients (including June Foray's "Millicent" character from "Rabbit Romeo").

Next up, we have Chuck Jones' "Daffy Duck's Thanks-for-Giving Special" from 1981. This special seems to have been done mostly to showcase Jones' "Duck Dodgers" sequel. The second Dodgers cartoon was originally made at the request of George Lucas to be shown in front of The Empire Strikes Back. However, those plans fell through and the short didn't surface until this primetime special (Production problems? Rejected by Lucas? Anyone know the story?). The version of "Duck Dodgers and the Return of the 24 1/2 Century" here actually includes some more footage that wasn't included in the stand-alone version of this short (most notably Marvin advising us Earthlings we have three days to prepare for Earth's destruction).

(On a sidenote, rewatching this special reminded me how funny "His Bitter Half" is. That shooting gallery gag makes me laugh every single time. Hopefully it'll be on a Golden Collection soon!)

I have always wondered if the final bit in this special ("Why don't we remake it before we shelve it") was Jones' commentary on the actual production of the second "Dodgers" cartoon?

And now for a TRUE Thanksgiving classic. Here's Art Davis' "Holiday For Drumsticks" from 1949:

Happy Thanksgiving!
Posted by Jon Cooke at 6:40 AM 3 comments:

Sorry for kind of slacking with the blog this month... anyway, check out this great blog post by our pal Larry T featuring the rarely seen UNEDITED version of "Buddy's Show Boat".

Click here.
Posted by Jon Cooke at 9:06 PM No comments:

Before Wile E. Coyote, Chuck Jones was creating parodies of the conventional "chase" cartoon. Here's one that's rearely seen these days, and it's a shame. It's a great cartoon, in bad need of restoration and recognition. Keep a lookout for an early Pepe Le Pew, and a dog catcher who looks a lot like Private Snafu but talks like Jimmy Durante!

FAIR AND WORMER
Uploaded by dandu386
Posted by Matthew Hunter at 7:31 PM 6 comments:

Chocolate maker Russell Stover has been releasing Looney Tunes items around Valentine's Day, Easter, and Christmas for many years now. Each Christmas they issue a set of PVC figures packaged with a small container of peanut butter cups. I saw this year's collection at Kmart tonight: 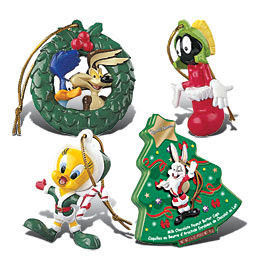 I was pleasantly surprised to see that RR and Coyote were among this year's collection (believe it or not, there wasn't a Taz this year). Keep an eye open for them.

UPDATE --- Well, after mentioning this to Matthew (the PVC collector extraordinaire)... it turns out these figures (with the exception of maybe Tweety) are repeats of figures released a few years back. I had never seen them before, so I must've missed these guys the first time around. Anyway, they are out there again for this holiday season!
Posted by Jon Cooke at 6:08 PM 1 comment: