Here is some rarely seen color footage from an episode of The Bugs Bunny Show hosted by Foghorn Leghorn and Miss Prissy.

"Sylvester Dries off and Dances to Unfitting Music": a new Youtube classic 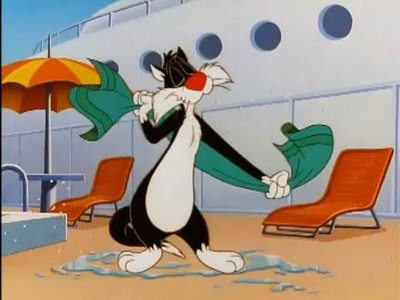 Normally, I ignore random Youtube videos that are crafted just for the sake of making no sense. But in my neverending quest to find long-lost treasures related to Looney Tunes to share with you, the readers of this blog, I have run across way too many random "poops" and "remixes". That said, let me share one with you that actually made me smile, for no reason other than the complete absurdity of it. A Youtube user by the name of "Videoguy" got his hands on an episode of "The Sylvester and Tweety Mysteries" and a tune called "Disneyland Main Street Electrical Parade", and created a 2-minute video of Sylvester, in an animation loop, dancing with a towel while drying himself off at a swimming pool. Scoff if you want, but this could give the "dancing banana" GIF animations a run for their money. And I dare you not to crack a smile in spite of yourself.

"Sylvester Dances While I Play Unfitting Music" by "Videoguy"
Posted by Matthew Hunter at 9:48 PM 1 comment:

Here's an interesting bit I found on Youtube: the Mitch Miller Singers performing "Lady Play Your Mandolin". Looney Tunes (technically, Merrie Melodies) fans will recognize this tune as the concept and soundtrack for the first Merrie Melody of the same name.

Here's the cartoon, for your reference.

Posted by Matthew Hunter at 8:45 PM No comments:

There's something about watching these old Looney Tunes On Nickelodeon intros, bumpers and commercials that takes me back to being 12 years old again. A Dailymotion user named "sledgewrench" has created a 4 minute long compilation of material from back in the show's heyday. Some of the material has been presented here on the blog before, but it also includes some stuff I haven't seen show up online before (such as promos for "Spring Fling" and "Spotlight" marathons). You have to hand it to the promo people at Nick, they sure got us excited about watching this "gleeful, mindless violence".

There is one Nickelodeon commercial that still eludes us. Around the time Nickelodeon revamped their Looney Tunes show, adding a new intro and phasing out the black-and-white cartoons (this was circa 1992, I believe), they ran a promo saying how the show would feature more of the Looney Tunes you love, and "No Bosko, sorry Bosko." Does anybody know where we could find this one?
Posted by Jon Cooke at 5:42 AM 3 comments:

The Acme Catalog: Quality is Our #1 Dream

When I first heard about the book "The Acme Catalog: Quality is Our #1 Dream", (written by Charles Carney and illustrated by Scott Gross in 2006), I figured it was little more than a fluff-piece. But when I found a used copy for about 5 bucks today, I figured "what the hell" and bought it. It's a 95-page paperback book designed to look like an old 1950's catalog, using selected Acme products from various Road Runner and other Looney Tunes films, plus a couple that I'm pretty sure are original creations specifically for the book. What makes it worth a look (though I never thought I'd say this) are Scott Gross' wonderful illustrations of the products. Gross may have done some horrible comic book covers and stories for the D.C. "Looney Tunes' series, but his renditions of the Acme products really shine here. They genuinely look as if you've picked up a 1950's Sears catalog, and are very faithful re-imaginations of the cartoon devices, in close-up, 3-dimensional renderings that look just like the photo-real paintings from old-time catalogs. "Acme Anvils", "Acme Bumblebees", "Acme Wildcat" and "Acme Hand Grenades" are all here, plus such cult favorites as "Dehydrated Boulders" and "Instant Girl". Don't buy it if you're looking for any in-depth historical information, or really any depth at all...but I can honestly say that I would not be ashamed to leave this out on my coffee table or in my bathroom for passers-by to browse through.
Posted by Matthew Hunter at 8:06 PM 1 comment:

In the onslaught of commercials featuring the Warner characters we've posted here, I never thought I'd learn anything about who created them. Well, as it turns out, many of the modern ads were animated by T.J. House, who, it seems, we can also credit for the animation of Superman in the infamous Jerry Seinfeld commercial. His "Director Reel", posted on Youtube, includes clips from a couple of MCI commercials, a Superman Burger King spot, and the ending to...you guessed it, ANOTHER Road Runner and Wile E. Coyote spot, for Aflac insurance. House has also worked on "Tom and Jerry Tales", "The Proud Family", and several other series I've never heard of...but impressive resume material, nonetheless!

Craig Kausen, Chuck Jones' grandson, has started a new blog devoted to his grandfather. This ought to be good!

I'm not sure when this commercial was made. Judging by the animation, it looks like Robert McKimson's work , possibly early to mid 1960's. Notice that it doesn't specify WHICH Yellow Pages he's using. I'm not positive, but there may not have been more than one company publishing yellow pages back then. These days I get at least three of the yellow tomes delivered to my door every year.

Posted by Matthew Hunter at 2:33 PM No comments:

Reader Jeff Cook sends us some pictures of some more Looney Tunes head-shaped mugs like the ones given out at KFC. Thanks, Jeff!

(And congratulations to anyone who actually knew what cartoon the title of this post comes from...)
Posted by Jon Cooke at 3:46 PM 2 comments:

Here's a story from Dell's Looney Tunes and Merrie Melodies comics, #85, November 1948. The story itself is not particularly remarkable- it's a far-fetched adventure involving confusion over an old newspaper article. It's worth reading, though, for the spectacular artwork. Thad Komorowski tells me that the story was drawn by Ralph Heimdahl, an ex-Disney animator who left animation to work in illustration and comics. He worked on the Bugs Bunny newspaper strip and a lot of Dell stories. Clearly, Heimdahl had actually seen the cartoons, or at least had access to some good model sheets...because Sylvester, Bugs and Porky rarely looked this good in the comics. Sylvester, most notably, went through many ugly incarnations. That's not the case here, as Sylvester looks just about as close to the Friz Freleng design as he ever got in comics.

The Kenner Give-a-Show Projector seems to have quite a cult following on the Internet. In those days before VCRs, DVDs, and YouTube, projecting film strips of your favorite cartoon stars on the wall was a huge deal. The toy apparently had quite a history (as you can see on the Give-a-Show Blog). From 1971, here are two reels based on "Tweetie Pie" and "Buccaneer Bunny" from Kenner's "Talking Show Projector". Enjoy the amusingly off-model drawings and the voices of Mel Blanc. One neat thing about discovering the "misce-looney-ous" odds & ends of WB history is listening to "lost" Blanc performances like these.

For more, go check out the The Give-a-Show Blog!
Posted by Jon Cooke at 3:00 AM 2 comments:

Bugs and Daffy star in this advertisement for the Visa Check Card released around the same time as Space Jam. The commercial also offers a glimpse back to a time when the Warner Bros. Studio Store was actually still in business.

A commercial for the Canon printer featuring Speedy Gonzales from 1995.

Remember these? In 1994 KFC offered a set of 4 plastic Looney Tunes mugs (shaped like the heads of Taz, Bugs, Tweety, and Wile E. Coyote ... what, no Foghorn??) with the purchase of their "Mega Meal" combo.

Of particular note is the Wile E. Coyote mug with its ridiculously long snout... making drinking from the thing virtually impossible. Can you imagine anyone actually sitting around reading the paper while sipping their morning coffee out of this thing?

After a short hiatus, Misce-Looney-ous is back in action with what you all really come here to see... yes, it's another commercial with the Road Runner! This time a public service announcement from 1987 for "Operation Lifesaver" reminding us to look both ways before crossing the railroad tracks (advice that Wile E. Coyote doesn't follow, of course).

Been meaning to post this for a little while now. Here's a Valentine's Day-themed commercial that started airing a few weeks ago for AT&T cellphones featuring Pepe Le Pew and Penelope.