I Tawt I Taw a Record Dealer 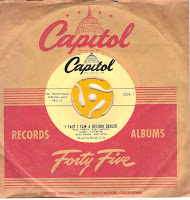 Now here's a real rarity (via David Gerstein on Facebook). The site QuispQuake Reaction has posted a promotional Christmas record for Capitol Records featuring Tweety and Sylvester (voiced by Mel Blanc) teaming up with radio personality, Baby Snooks. This short record concludes with our favorite cat and canary singing a duet of "Jingle Bells".

Click here to listen!
Posted by Jon Cooke at 3:02 AM 4 comments:

Here's a little something our pal Charles Brubaker shared with me on Facebook. This is a set of Looney Tunes stickers from 1993 that broke the trend of using stock clip art and actually seems to have taken poses from the actual cartoons. If you grew up in the 90's, chances are you or someone at your school had these plastered on binders and other stuff. They were everywhere! 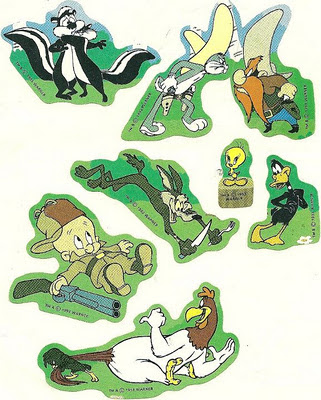 Return of the Revenge of the Sequel to the Looney Tunes Commercials!

Guess what we found? That's right folks, more Looney Tunes commercials! And wouldn't you know it...one of 'em's got Wile E. Coyote in it!

First up, a 1993 British commercial for Walker's Looney Tunes chips. Wile E., via footage from "Zipping Along", tries the "induce a person to jump off a cliff" hypnotism bit on comedian Greg Proops.


And, another Walker's LT tie-in, presumably made around the time of "Space Jam":


Next, a "blooper" segment featuring Foghorn Leghorn. Not sure where it came from, presumably Cartoon Network.


Finally, a 1977 commercial for LT Pepsi glasses at Hardee's restaurants.

Joe Alaskey's Carnival of the Animals

Most Looney Tunes fans are familiar with Chuck Jones' 1976 TV special "Bugs and Daffy's Carnival of the Animals". It combined the orchestral music of Camille Saint-Saëns and the poetry of Ogden Nash with animation of Bugs Bunny and Daffy Duck, as well as abstract animated musical segments.

It seems there was another "Looney" interpretation of "Carnival", done as a live performance with the West Coast Symphony in 2004. Joe Alaskey performed introductions to the musical pieces as Daffy Duck, Bugs Bunny, Marvin the Martian and Yosemite Sam. Someone recorded it (or at least most of it), and it's a real gem.

Posted by Matthew Hunter at 8:15 PM No comments: