Here's a fun little promo from Poland's version of Boomerang featuring the LT characters among other familiar faces. It sure beats those tiresome bumpers of Hanna-Barbera toys marching around we've seen on the United States Boomerang since it launched in 2000.

I have no idea when this was made, but it must be fairly recent. On a trip to a Big Lots closeout store today I saw a bunch of these "Limited Edition" metal Looney Tunes lunchboxes from Thermos for $5.00 each. It was apparently designed to look like a vintage 1950s lunchbox. Anyway, check out the amazing artwork on this thing (both sides): 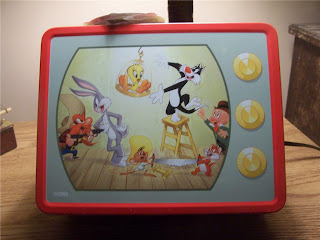 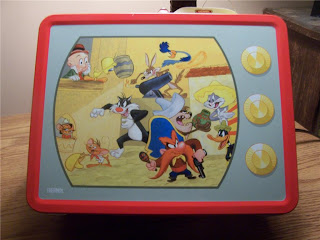 Anyone know more about it (or possibly who did the artwork)?
Posted by Jon Cooke at 8:50 PM 5 comments:

There's a recent ad for Jeep that has been played to death on TV. In it, a jeep drives through various culturally significant scenes...World War II, Woodstock, Jane Goodall and chimps, a Devo video, etc. Believe it or not, they even have the jeep racing the Road Runner and Coyote. Yes, folks, it's ANOTHER commercial featuring Wile E. and Roadrunner. After some research, I found that the song is called "Sunshine" by Jonathan Edwards.

The Wabbit of Oz

Available now at Hallmark stores is this set of four Halloween-themed Looney Tunes ornaments. Called "Trick or Treating in Oz" the set has Bugs as Dorothy, Taz as the Cowardly Lion, Tweety as the Tinman, and Sylvester as the Scarecrow. 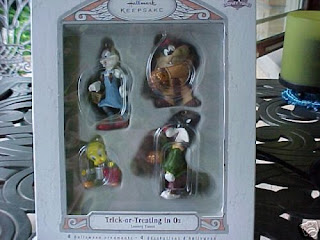 I'm not gonna talk over this one. Chuck Jones' wonderful direction and Carl Stalling's music are a much better commentary! This is a rare one-shot that, to me, is as good a use of the art of black and white as you can get! I found this great-looking copy of it on a dollar-bin Public Domain DVD. It's part of the Digiview "Cartoon Craze" series, on a collection called "Porky's Cafe", for those interested in locating it. It's an interesting, artisticly stunning little film.

Posted by Matthew Hunter at 7:48 PM No comments: 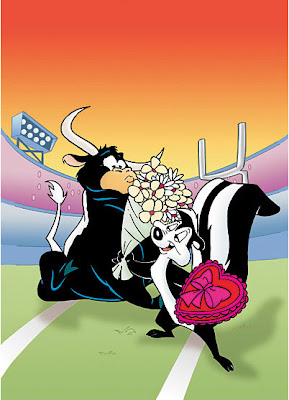 This month's issue of "Looney Tunes" from DC Comics may be Pepe Le Pew's most bizarre and twisted romance yet...even more so than his first cartoon, "Odor-Able Kitty", where his target was a male cat.

In this month's cover story, Pepe goes after El Toro...the bull from "Bully For Bugs". Pepe is either sick, stupid or both...
Posted by Matthew Hunter at 6:56 PM 9 comments:

Here is a sample of the great bridging sequences from the original Bugs Bunny Show. The video quality isn't the greatest in the world, but there are some fun bits in here with Porky Pig and Charlie Dog worth checking out (the first bit with Bugs explaining how animated cartoons are made is already available in higher quality on the first Golden Collection DVD):

Check out this user's other videos for some rarely seen Tom & Jerry animation created for the CBS Saturday morning T&J show by Chuck Jones' unit at MGM!
Posted by Jon Cooke at 6:34 AM 1 comment:

Here's a 1960's Warner cartoon that is well-remembered but seldom mentioned. Terrible or tolerable... watch my commentary and be the judge!

While vacationing in Wildwoood, NJ I saw this interesting pool sign. The Yosemite Sam looks spot on so I took some pics. I asked the hotel owners if they knew who the artist was, but they forgot. Great site, keep up the swellegant work! 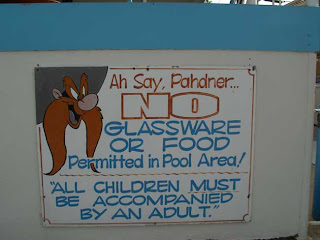 Check out these new Looney Tunes vinyl figures made by the company "Funko" (best known for their "Wacky Wobbler" bobblehead figures). Called "FunkoVision", each set of two figures comes in a retro looking TV set case. The first two sets have just come out: 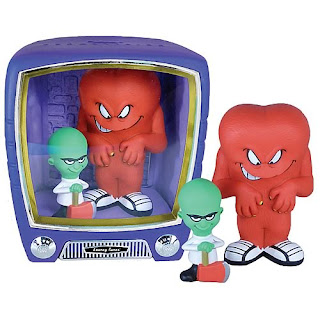 Yosemite Sam and the Dragon (from "Knighty Knight Bugs"): 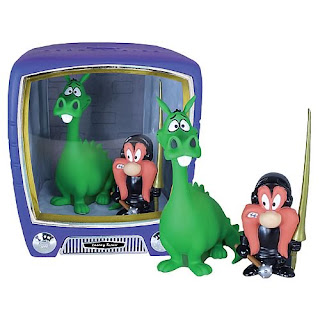 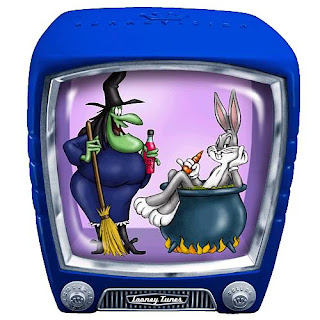 Daffy and the Abominable Snowman: 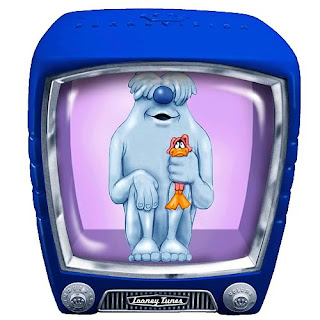 Each of these sets are limited editions of 1,500 and are selling for $29.99 each through http://www.entertainmentearth.com/

You can also visit the Funko website to see their other products.
Posted by Jon Cooke at 9:00 PM 1 comment:

Looney Tunes on Youtube...criminal or the best thing to ever happen to Looney Tunes?

It seems like the lawyers who browse Youtube.com to purge the site of copyrighted material have gone on vacation recently. In their absence, a multitude of classic cartoons have sprung up...and from a multitude of different users. The displaying of copyrighted material on the internet has always been a touchy subject, ever since the music industry got fired up about downloading songs back in the 90's, a battle that continues to this day.

But unlike modern rock bands, nearly all of the people who created the Warner Bros. classic cartoons have passed away. Their characters and films live on, but in the past few years, Warner Bros. itself has done little to promote them. Aside from the wonderful "Golden Collection" DVD series, the 5th volume of which is due this fall, merchandising has dwindled, TV airings have literally stopped, and the future of Warner Bros. classic animation is literally in the hands of fans who want to keep it alive.

Through websites like Youtube, Dailymotion, and Myspace, hundreds of users have dusted off their old tapes of Looney Tunes from TV, digitized them, and shared them with the world. Full-length movies, even full TV shows, are a pain to upload and a chore to watch online...but 7-minute shorts are ideal entertainment for the internet. In response to the phenomenon, it seems Warner Bros. has decided to team up with sister company AOL to create "in2tv.com", where one can watch hundreds of Looney Tunes and several modern cartoon series including "Taz Mania", "Pinky and the Brain", and "Batman: The Animated Series." It costs neither the company nor the viewer anything, and only serves to promote the plethora of DVD releases. Given the choice between a low-resolution video of one episode in a 4-inch box and a DVD set of pristine copies of lots of episodes for 40 bucks or less, I'd definitely buy the DVD. Yet another interesting fact...In2TV actually links to cartoons posted by random users on Youtube!

So before they change their minds, browse Youtube. Search "Merrie Melodies", and you'll find a treasure trove of classic cartoons. I'll leave you with these:

You know what this blog needs? Some more Road Runner-themed commercials!

We've seen the first one, now here's the second commercial from 1994 in which Wile E. attempts to catch the Energizer Bunny:

Here's a 1991 commercial for Shell gas stations from New Zealand: