A big thanks to GAC Forums user "Fibber Fox" of the Yowp blog for sending along this newspaper story from Sept. 26, 1968. This reveals that Warner Bros.-Seven Arts was indeed developing a primetime Lil' Abner animated series (in color) for the 1969-70 television season. 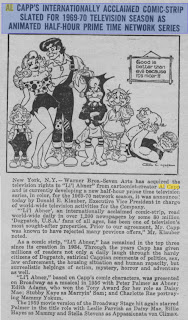 I thought I should document this oddity before it disappears. Currently on eBay is this 1969 model sheet and inhouse memo of Al Capp's Joe Btfsplk, World's Worst Jinx character from the "Lil' Abner" comic strip. The memo says how the title of the project (was this going to be a short? TV pilot?) has been changed from "Al Capp's Lil' Abner" to "Joe Btfsplk, World's Worst Jinx". Of course, this Warner Bros.-Seven Arts cartoon was never made. The model sheet looks very McKimson-esque to me (this same seller also has quite a bit of other original McKimson art up for bid as well, which supports the theory). 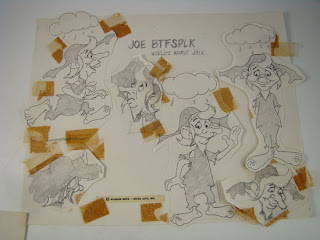 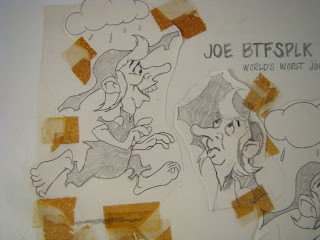 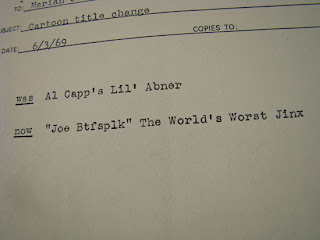 Here's a bizarre promo from the Cartoon Network in India. Wile E. Coyote (via re-used animation from the old cartoons) chases the Road Runner, but Scooby and Scrappy Doo keep getting in the way. This is notable only for how surprisingly bad it is. Usually the foreign Cartoon Network has better ads than our own!

Posted by Matthew Hunter at 6:40 PM No comments:

Here's something we haven't posted on Misce-Looney-ous awhile (no, not another Road Runner commercial... for now): a commercial with Bugs promoting Kool-Aid! From 1966, here's Bugs (sporting a stylish shirt) helping a little boy named Jimmy make some friends by whipping up a batch of ice-cold pre-sweetened Kool-Aid.

Gee, Jimmy is kind of a jerk. Not only does this kid not seem impressed that THE Bugs Bunny appears out of nowhere to visit him, but he doesn't even save Bugs any Kool-Aid and then ditches him at the end of the ad as he runs off with his new friends!
Posted by Jon Cooke at 10:32 AM 1 comment:

Here's a commercial I've been trying for a while to track down, and thankfully someone has found it! Here's a commercial from 2004 for Aflac insurance. The Aflac Duck gets mixed up in a Road Runner and Coyote chase, while Bugs and Daffy (both voiced by Joe Alaskey) try to remember the company's name.

Here's a commercial for a set of stuffed toys offered by McDonald's as a tie-in for "Space Jam" in 1996.

I recently asked "fail toy" expert and professional toy designer, Mike Mozart of JeepersMedia, if he had any "fail" Looney Tunes in his massive collection. He posted a quick video reply on his Twitter account, showing off a "dead" Tweety doll:

Be sure to check out Mike's oddball toy review videos on YouTube.
Posted by Jon Cooke at 11:02 AM 2 comments:

I thought I'd share a recent flea market find. Here are a trio of ceramic Looney Tunes figures from 1979. I have had the Porky figure in my collection for awhile, but I only recently stumbled across Sylvester (who seems to be striking the girliest pose possible --- c'mon, it even looks like he's wearing lipstick!) and Wile E. Coyote (which actually looks really nice). I am not sure which company made them or how many are in the set, but if you have any more info feel free to leave a comment. 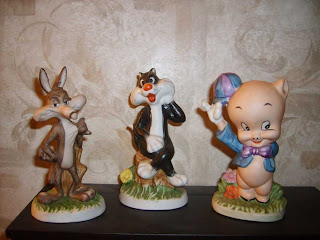