When Hugh Harman and Rudolf Ising first started up the Warner cartoon studio with Leon Schlesinger, their main competitor (and former employer) was Disney. Naturally, they wanted to emulate Disney but offer something Disney didn't. Their gimmick was funny (and at times gross) gags and a musical theme that differed from Disney's: Instead of calm, sweet stuff, they set their cartoons to hot jazz and had their characters sing along with synchronized lip movements. Their flagship series, "Looney Tunes", starred Bosko and were more plot-driven, while "Merrie Melodies" alternated between "Foxy" the fox and "Piggy" the pig, in more musical plots. A dog character named Goopy Geer appeared in a handful of cartoons. The recurring stars in "Merrie Melodies" were later dropped in favor of a purely one-shot setup with no real recurring characters.

In the modern era of jaded audiences and a fear of anything black and white, these early cartoons are woefully overlooked. Some are actually edgy even by today's standards, so much so that they are unavailable on TV or home video to this very day. Here are a couple great examples:

"Hittin the Trail For Halleluja Land" (1931)
This cartoon is a hilarious parody of Disney cartoons of the day...but the parody is often overlooked due to the depiction of African American stereotypes. Because of the stereotyping, this short landed on the inafamous "Censored Eleven" list, and is rarely seen. That's too bad, because as you can see, it's a great cartoon! (Notice the gag with Piggy in a dead-on parody of the famous Disney short "Steamboat Willie!")


"You Don't Know What You're Doin" (1931)
Another Piggy entry. Though this version is partially dubbed in Spanish, you still get the idea! One of the most surreal cartoons of all time, giving even the wildest Fleischer stuff a run for its money. Don't drink and drive, folks...ESPECIALLY if you're in a cartoon!

Bob Bergen (the current voice of such Looney Tunes stars as Porky, Tweety, and Speedy Gonzales) wrote to us a few months back and mentioned the following brief bit that was inserted at the very end of the final episode of the Duck Dodgers television series.

It features Daffy heckling caricatures of Bergen along with co-star Joe Alaskey. Since this episode only aired on Boomerang (and never on Cartoon Network), I am sure not many people got to see it.

First, Bugs is on stage where he finds himself in the middle of the Coyote's pursuit of the Road Runner in this clip introducing the second half of The Bugs Bunny/Road Runner Hour:

Here is the original ending of the show. Wile E. is setting up his latest trap for the RR. Meanwhile, Bugs just happens to be driving by in his little red car (with a horn that sounds remarkably like our fast-feathered friend)..... disaster ensues. Stay tuned after the credits for the two stars of the show telling us we had just watched a "Warner Bros.-Seven Arts television presentation.":

For the final season of The Bugs Bunny/Road Runner Show (1984-5) CBS gave the show a whole new, more modern theme song. This is not the full version, but one that ran when the second part of the show began. The full version was a bit longer (if you know where we can find a copy, let us know).

Maybe better versions of these clips will show up as DVD bonus material one day.
Posted by Jon Cooke at 1:58 PM 4 comments:

The Brilliance of Tiny Toons

I know I'm going to get flak for this. But damn the torpedoes. A lot of purists have dragged "Tiny Toon Adventures" through the mud in recent years, pointing out all its failures and missing (or refusing to acknowledge) its triumphs. A number of bits and clips, and a few complete episodes, have shown up on Youtube, and seeing them again has not only brought back memories for me, but made me realize how good the show really was, especially compared to anything that came before or after it.

For those unfamiliar, this was NOT "Baby Looney Tunes". The characters were NOT the Looney Tunes as kids. In fact, the classic characters often appeared alongside their new proteges to give advice and laughs along the way. The characters were not babies, they were older kids, attending a school called "Acme Looniversity" to learn how to be as skilled at life and comedy as their classic idols.

One of the series' finest moments was a direct to video feature called "How I Spent My Summer Vacation", that took pop-culture parody, classic homages and character development to a new level. (listening, cynics?!) It was divided into several sub-plots, and this segment of the Buster Bunny/Babs Bunny "Float Trip" adventure took the time to pay tribute to several sources...the classic film "Deliverance", Robert McKimson's "Hillbilly Hare", musical cartoons in general, and the good old fashioned cartoon chase. Buster Bunny and a possum jam out in a banjo solo of the Tiny Toons theme song, (Buster on his tongue, possum on his banjo) while Babs revives the good ol' Bugs Bunny chase gags. The result is one of the most fun bits of animation of the 90's.

Enjoy this segment from "Tiny Toon Adventures: How I Spent My Summer Vacation"!

Video games based on Looney Tunes have been around almost as long as video games themselves. Now we can add another title to the growing list. Looney Tunes: Duck Amuck from Warner Bros. Interactive and WayForward Technologies is coming for the Nintendo DS this fall. Some more information and pictures can be seen here: http://ds.ign.com/articles/781/781210p1.html.

In the meantime, this clip has surfaced on YouTube:

With much fanfare and a $15 million ad campaign, Tyson Foods launched a line of Looney Tunes microwavable frozen dinners for kids in 1990. The launch of the meals coincided with the huge marketing campaign that honored Bugs Bunny's 50th birthday. The meals were promoted as being "nutritious" and each meal came with its own prize inside (the prizes varied and included trading cards, sheets of stickers, mini activity and comic books, and character-themed trivia games). The initial line-up of meals included:

Sales of meals started off strong enough for Tyson to add three more dinners the following year (sorry, I don't have images of these boxes):

Soon after, sales started to drop off (partly due to too much competition at the time with other companies' kid-themed frozen meals). Even the addition of "Bugs Bunny and Tasmanian Devil" and "Foghorn Leghorn and Henery Hawk" themed pasta entrees failed to generate much interest.

Thanks to Tim Hollis for the images.
Posted by Jon Cooke at 2:15 AM 5 comments:

While we are still celebrating Daffy's 70th, I thought it would be a good time to post one of "the little black duck's" vintage comic book stories. "The Charming Chump" has Daffy taking romance lessons from Pepe Le Pew (in one of his very few Dell-era comic book appearances).

Here are two cartoons...one classic, the other, well... it's not as bad as others from the era! The first, "Porky's Duck Hunt", is the very first appearance of Daffy. The second, "Fiesta Fiasco", is one of the final theatrically released Daffy cartoons (ironically involving his birthday, technically his 30th!)

Add to My Profile | More Videos
Posted by Matthew Hunter at 4:41 PM 1 comment:

Before he liked pink, he thought green

Long before they decided to make Tweety a transsexual, the folks at Warner Bros. had something a bit more wholesome planned that never got off the ground. "Tweety's Global Patrol" was a proposed promotion of environmental awareness. Rumors of a TV series arose, and a children's book was published. But, for whatever reason, the only new animation that came of it were a couple of public service ads for TV. This nicely animated bit from 1992 was most likely made by the Darrell Van Citters crew who animated "Box Office Bunny" and the updated "Bugs Bunny and Tweety Show" opening.

We have covered what we have called examples of the "mis-marketing" of the Looney Tunes stars a few other times on this blog... but this is the one that takes the cake. I am referring to the trend in recent years by the Warner Bros. consumer products department to turn Tweety into a female.

With products like these, is it any wonder that so many people aren't sure if Tweety's a "he" or a "she" these days? 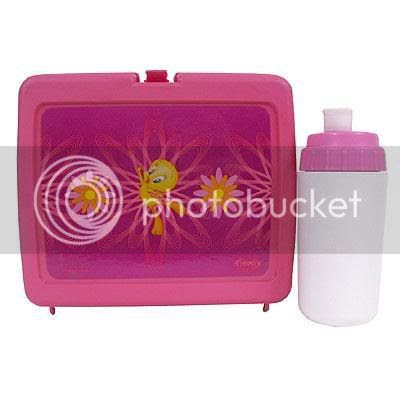 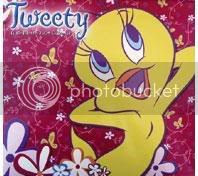 I have no idea what to make of THIS poster... 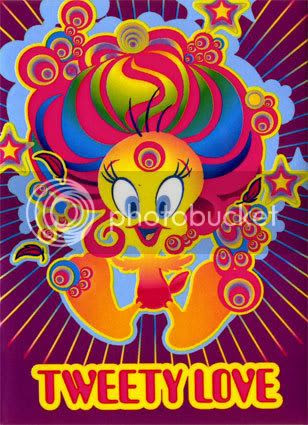 I don't have too much to say about this Tweety & Sylvester clip, except that it's a scene that always make me laugh.

Adding to the scene is Carl Stalling's use of the tune "Freddy the Freshman" which was also the tune used in this 1932 Merrie Melody short from Harman & Ising. Enjoy!

I promise, I've got more "random and weird" stuff on the way. Plenty of it. But I figure it's my public duty to bring attention to the great cartoons that inspired all of the fun merchandise, ads and miscellany that this blog is based on. Jon's post on Foghorn Leghorn selling hot dogs reminded me of something...just how funny Foghorn Leghorn is.

I am not as tuned into who drew every scene and every drawing in cartoons as some are, but I do know that the collective effort of them at Warner Bros. was better than just about all the others in the golden age. I do know that Robert McKimson directed every Foghorn Leghorn short, and nearly all of them were amazingly funny. I don't understand why so many critics pick on McKimson. Rather than go into analyzing and/or defending McKimson, I'd rather just show one of his best cartoons. Foghorn Leghorn and Henery Hawk star in "Hen House Henery', which, I believe, is the first time "Camptown Races" was used as Foggy's iconic theme song.

Add to My Profile | More Videos

Pick on McKimson all you want. But remember, he did this, ok?

Here is a 1981 Oscar Meyer commercial featuring Foghorn Leghorn ( I guess this was before Foggy started promoting the joys of eating chicken).

Also, if you head over to Cartoon Brew, Jerry Beck has posted a rarely seen TV spot from 1962 of Bugs promoting the movie, Lad: A Dog: Click here!
Posted by Jon Cooke at 5:48 AM 1 comment:

Battle of the Drag Racers!

I think Matt and I will have to start calling this the Road Runner Blog if this keeps up.

I found this online a few days ago on a movie poster website. WB would sometimes package up "Cartoon Revues" of their shorts for theatres to run on Saturday kiddie matinees (trailers for some of these Bugs Bunny Cartoon Revues can be seen on the various Golden Collection DVD sets). Here's an (ugly) poster for a 1966 "Cartoon Revue" focusing on "the fastest characters in the cartoon world": Road Runner and Speedy Gonzales. I think it would be a safe bet to assume that 1965's "The Wild Chase" was among the shorts on the playlist. 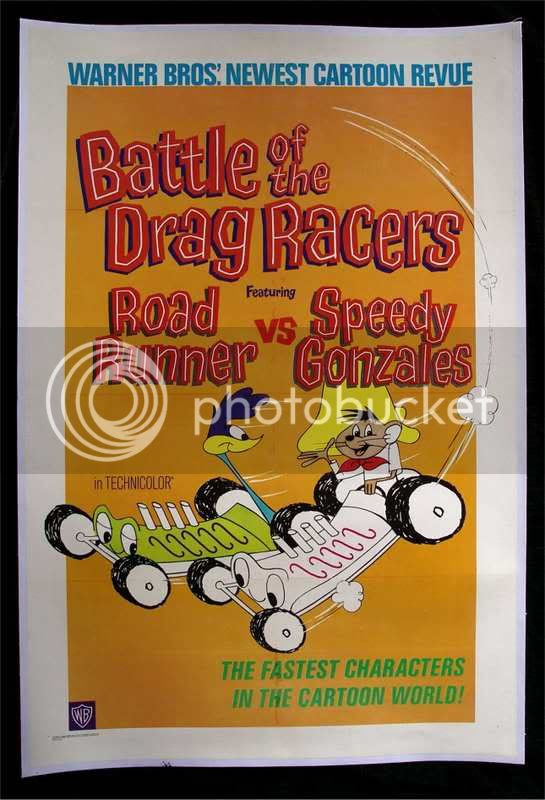 While on the subject of Road Runner...

While on the subject of Road Runner, and our pal Thad K's April Fool post about Rudy Larriva's cheap post-1964 cartoon efforts, Here's a great later Chuck Jones Road Runner cartoon that doesn't get near the recognition it ought to. "Lickety Splat" (1961) has never been released to DVD, and I'm not sure if it even made VHS, come to think of it. No April Fool here, folks. I won't give anything away, but it has a hysterical ending.