Matthew and I have put together a recreation of what the original opening and closing to Chuck Jones' 1946 Sniffles cartoon "Hush My Mouse" might have looked like (similar to what Matthew did a couple months ago with "Bedtime For Sniffles"). The cartoon was originally a Looney Tune but was later reissued as a Blue Ribbon Merry Melody (minus its original titles). I think the results came out pretty good considering what we had to work with.

"Isn't it wonderful what you can do with some wire and a few electric bulbs?"

Hush My Mouse with restored credits
Uploaded by MatthewHunter

I created the title cards using the original artwork which was posted by Jerry Beck at Cartoon Brew awhile ago. Using PhotoShop, I pasted the title lettering as seen on the Blue Ribbon reissue onto it (I have no idea if it originally said "Sniffles in" above the title, but I thought it looked good). Next, I took the production credits and director's credit from "Hare Tonic" (1945) which was identical and used the same font style that most cartoons with existing credits from 1945-6 have (it's impossible to see, but I actually did Photoshop on the correct MPAA number... how's that for attention to detail?).

Next, Matthew edited on the opening to "Book Revue" another Looney Tune that was released in 1946. It didn't have a character headshot in the bullseye, making it likely that it was used for "Hush My Mouse" as well. The music playing over our fake opening was lifted from "Mouse Wreckers" (1948) and it actually fits quite nicely. Finally, it is believed that "Hush My Mouse" was the final Looney Tune to use the Porky in the drum end title, so that is what Matthew added onto the end here (again, lifted from "Book Revue").

Thad K has posted an excellent post on his blog celebrating the works of Tex Avery on this 100th anniversary of his birth. As I said in the comments on Thad's blog, I have been going through my WB cartoon collection chronologically lately and Tex's influence on what would become the WB cartoon style is undeniable. Even the gags in Freleng's and Jack King's cartoons got a bit faster paced once Avery came onboard. Without Avery, I have to wonder if WB cartoons would have been doomed to be as forgettable as the cartoons of Columbia or Terry. Yeah, he eventually got into a bit of a rut with all those travelogue spoofs... but his Porkys and Merrie Melodies were really groundbreaking.

Here are two of my favorite cartoons he did at WB.

Just about every 1990's "classic cartoon revival show" had an "origin story" episode. Tiny Toon Adventures was no exception. Those of you who hate Tiny Toons may want to skip this post. But the rest of us, who liked the show and long for a DVD release of Tiny Toons, might want to check this out. This episode, entitled "The Looney Beginning", details the origin of the characters in "Tiny Toon adventures", and also features prominent participation from Bugs Bunny (voiced by Jeff Bergman, as Mel Blanc died before this series began.) Here's the origin of Buster, Babs, Plucky, Hamton, Montana Max, and others. Haters feel free to hate, fans feel free to enjoy.

Today marks the first anniversary of this blog! Even one year and 200+ posts later, it still feels like Matthew and I haven't even begun to scratch the surface of oddball Looney Tunes-related stuff to write about. There's just so much stuff out there and we still find stuff we had no idea existed all the time. I just wanted to thank all of our regular visitors for all their comments, e-mails and support. Also, thanks to Jerry Beck for plugging this blog a few times over on Cartoon Brew. Special thanks to Thad K, Bob Bergen, Tim Hollis (for sending us tons of great stuff which we are still using one year later), David Gerstein, and everyone else.
Posted by Jon Cooke at 12:00 PM 7 comments:

A Trip to the WB Store

Ah, I miss those WB stores. Looking back, even though I could spend hours browsing around in them, I didn't really buy much of their exclusive merchandise (being a high school student with limited funds at the time played a big role in that). Whenever I did find myself in a WB Store, I bought the occasional shirt and usually a Looney Tunes VHS tape or history book (remember this was pre-Amazon.com). In fact, my copy of Jerry Beck & Will Friedwald's Looney Tunes & Merrie Melodies book was purchased at the Warner Bros. Store in Danbury, CT around 1993 or so. I had no idea such a book even existed at the time and remember reading the thing the entire car ride back home. That book was by my side at all times for many years. I still have that same book. It's now falling apart and has pencil marks all through it. Here's a picture of the well-loved book that made me what I am today. 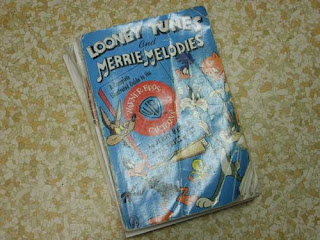 One piece of WB Store merchandise I still have kicking around is this "This Is It" music box. Based on the then-current revamped intro to ABC's Bugs Bunny & Tweety Show. You wind it up, pull out the little drawer, and Bugs "dances". No idea WHY I bought this. It's kind of neat, I guess. 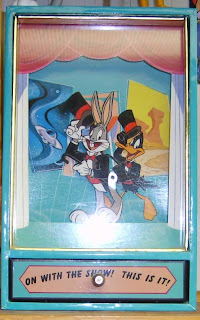 Near the end of their run, the WB Stores found some success cashing-in on the Beanie Baby fad. They cranked out dozens of bean bag dolls based on nearly every single cartoon character they owned. I am kind of embarrassed to admit I collected these for awhile. It was impossible to resist the novelty of owning beanie babies of such obscure Hanna-Barbera characters as Yakky Doodle and Baba Looey. It turned out to be a good investment, though. Those obscure H-B character bean bags made me a decent chunk of change on eBay a few months ago (who knew there's a collector's market for Wally Gator and Squiddley Diddley dolls?). However, there were two I will never bring myself to sell. They aren't even Looney Tunes-related...Yes, they actually made a SCREWY SQUIRREL bean bag doll! How crazy is that? 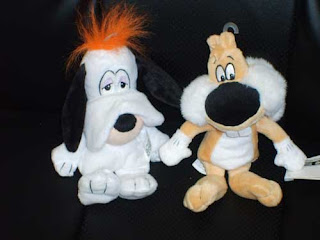 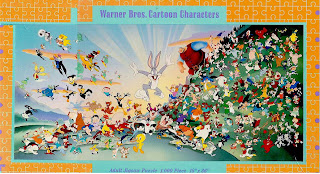 Here's my commentary on a pre-"Wild Hare" Bugs Bunny cartoon.

The WB Store is Closed! 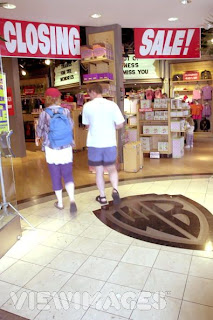 There's a new blog in town. Juan Ortiz, a product designer for the Disney Store and the now defunct WB Stores, has created a new blog: The Warner Bros. Studio Store is Closed!. It is a must-see for Misce-Looney-ous fans. Ortiz is uploading some wonderful images and commentary about his time with the Warner Stores.
Posted by Jon Cooke at 11:11 AM 4 comments:

1934, as I have said before, was not a good year for Warner Bros. cartoons. But there are some interesting cartoons in the batch. While Buddy never set the world on fire in terms of popularity or, for that matter, personality, several of his rarely-seen cartoons deserve another look. The problem with Buddy is that the bad cartoons in the series were SO bad that they're all people remember about the character. Add to that an absence from TV and video for 20 years and historians and critics recoiling in terror at the mention of his name, and you've got a character with a reputation worse than that of rapper Vanilla Ice...except that guy has somehow managed to remain in the public eye.

What made the Buddy series so uneven was a lack of character development. Buddy's age seemed irrelevant, he was sometimes portrayed as a young boy, others a childlike, almost Pee Wee Herman-like adult. Here, unseen by most of the world for a very long time, is one of my favorite Buddy cartoons. In "Buddy's Adventures", Buddy's ultra-happiness and love of music is used as a plot device rather than an an accepted constant. In the more run-of-the-mill entries in the series, Buddy doesn;t have to make much of an effort at anything. In this one, directed by Ben Hardaway (later a key player in the development of Bugs Bunny and Woody Woodpecker), Buddy runs up against a whole kingdom full of people who don't like happy, musical cutesy characters like him...and I think it works pretty well.

Too bad cartoons like this were the exception rather than the rule.

When Cartoon Network Loved to Singa

For many years, the now-terrible Cartoon Network had a great respect for classic cartoons. For several years, they even created themed marathons of classics, ranging from lengths of 3 hours to 3 days! One such marathon was the "Greatest Cartoon Countdown". Occasionally, CN would create snippets of new animation for these specials.

Here's a bit with Owl Jolson himself introducing "I Love To Singa". The discussion his "Super Bowl Halftime Show" refers to yet another long-time tradition...CN's mock-Super Bowl "character vs. character" marathons. Appropriate for Super Bowl weekend, don;t you think?