Here's an early Six Flags commercial featuring Bugs Bunny and Elmer Fudd. I believe it's Mel Blanc doing the voices, for what must have been one of his last performances before he passed away in 1989. 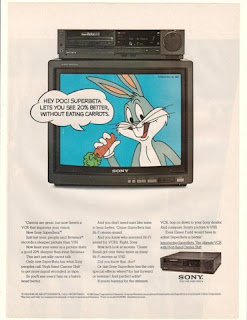 Bugs Bunny promotes Sony's "Superbeta" VCR from 1985. Watch the commercial featuring Bugs, Elmer and Porky at the 06:22 mark in this longer video of outdated Sony commercials below.

In Memory of... the Local Kiddie Cartoon Shows

Anyone who grew up from the 1950s to the early 1990s has memories of at least one: the local station's kiddie cartoon show. Well-worn prints of the Warner cartoons, sometimes mixed with cartoons from other studios like Popeye, Tom & Jerry and Woody Woodpecker and sometimes with a local personality as the host. These shows flourished for many years (at least until the cartoons were withdrawn from syndication and broadcast only on cable TV in the late 1990s). I am sure it was shows like the ones in the promos below that introduced many generations to these great characters. Feel free to post memories of YOUR local station's cartoon show in the comments. [Note these aren't MY local stations, just random promos I found on YouTube.]

"We The Animals Squeak" commentary

One of Bob Clampett's lesser-known Porky Pig classics barely involved Porky at all...But here's my take on it, and why I think it deserves more attention!

We the Animals Squeak- Commentary
Uploaded by MatthewHunter
Posted by Matthew Hunter at 7:40 PM 3 comments:

In the comments to our "Hush My Mouse" post, J Lee asked: Now -- Wanna go for recreating the opening titles to "Tweetie Pie" using the original audio? ;)

This was a tricky one since unlike "Hush My Mouse", we had NOTHING to go by artwork-wise. I ended up using a combination of the title lettering from the Blue Ribbon reissue and artwork of Sylvester & Tweety from the original lobby card. The background is actually the title card art for "Kitty Kornered" (1946) with Porky & Sylvester removed, obviously. The production and director's credit come from "Back Alley Oproar" (1948). Most of the Merrie Melodies from the 1946-7 season were reissued as BR Merrie Melodies, luckily "Hollywood Daffy" was an exception (which is where the opening titles came from).

Yes, that music playing over our fake opening is the original. For whatever reason, some TV prints of this cartoon used the original audio playing over the Blue Ribbon opening titles. Weird, huh? Our pal Larry T posted this oddity over on his blog awhile ago.
Posted by Jon Cooke at 8:08 PM 4 comments: