Our pal Charles Brubaker has come accross a real rarity: two samples of a comic strip drawn by Chuck Jones in the late 1970's.

"For a brief time in the late '70s, Chuck Jones decided to give newspaper syndication a try. He sold a strip called "Crawford" (later retitled "Crawford and Morgan") to Chicago Tribune's syndication arm.

Needless to say, it was short-lived, and for a reason: it was boring. Chuck wasn't doing his best work in the '70s and his good days were behind him.

It didn't run in many papers and they were never reprinted, so copies of it are hard to find. However, I was going through my comic strip collection and found two, so here they are:" 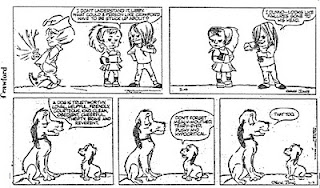 Maybe not Chuck Jones' best work, but these two strips alone put most anything else in the papers these days to shame. If any of our readers have more examples of this rare Jones work, please feel free to share them with us!
Posted by Matthew Hunter at 6:36 PM 2 comments: 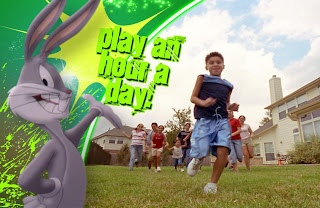 The Looney Tunes characters continue their crusade for healthier kids by teaming up with First Lady Michelle Obama's Let's Move! initiative. An upcoming series of public service announcements will feature Bugs, Daffy, Tweety and Taz alongside a series of professional athletes.

"We are honored that the Looney Tunes characters are supporting Michelle Obama, the Department of Health and Human Services and the Ad Council in this campaign to combat the problem of childhood obesity in the United States," said Brad Globe, president, Warner Bros. Consumer Products. "Bugs Bunny, Daffy Duck, Tweety and Taz uniquely deliver this important message in an entertaining way, and are the perfect ambassadors of fun and active lifestyles for families across the country."

The full press release can be found here.
Posted by Jon Cooke at 2:28 AM 5 comments:

The following images and information come to us from our friend Jerry Beck. He also poses a question: how many more of these were made?

"This week on Facebook I posted five LOONEY TUNES COLLECTORS CARDS I saved from packages Wonder Bread in 1974. I'm sending you the scans if you want to use them on your website.


Does anyone have the whole set? I'd love to see the other cards in this series. I don't even know how many different cards there were. "