While the subject matter is not very timely (considering Christmas is a full three months away and Halloween isn't for a month, either) but I saw this on Youtube and am amazed by how shockingly, eye-stingingly, ear-pollutingly bad it is. This is a Christmas show that Six Flags theme parks put on, and from what I understand, they've been doing roughly the same routine since the mid 90's. The song will sound familiar if you have the Christmas album "Christmas With The Looney Tunes", and the costumed characters are no surprise either.

But something new has been added! Apparently Six Flags decided to show some Christmas spirit (sadism) and give some failed broadway actress a job (Career-dooming gig). That's right kids, reach for the stars. Aspire to become an actor, and someday you, too can entertain millions (Okay, maybe just a couple hundred) with the magic of your own beautiful (American Idol-rejected) voice, accompanied by 4 people in Looney Tunes costumes lip-synching (Wait...they don't have moving lips) to a 15-year-old children's Christmas album.

Don't say I didn't warn you.

Here's a cartoon that isn't on DVD yet. The fact that it isn't is a crime that should be punishable by flying firecrackers. In fact, I'm not sure it was ever on an official VHS release, either. "Lickety Splat" (1961) is one of a string of Road Runner cartoons that Chuck Jones directed before calling it quits at the Warner Bros. studio. This particular cartoon is about as pure Chuck Jones as you can get, considering he recieves both direction and writing credit.It's one of my favorites and always manages to make me laugh. So if you need a Roadrunner fix like I did today, here's the cure for what ails you!

I have nothing to do with any of the videos uploaded to video sharing website www.revver.com, but I would suggest that any Looney Tunes fanatic type in "Looney Tunes", Merrie Melodies" or "Warner Brothers Cartoon" in the search field. There is a ton of rare and interesting stuff on there, and much of it is worth a look. There are some color-redrawn versions you will want to avoid, but there's also rare stuff like this:


I wouldn't bet on these showing up on TV anytime soon, and many of them are extremely hard to see. Check this stuff out before it's gone!
Posted by Matthew Hunter at 7:33 PM No comments:

I Tawt I Taw Some Putty Tats

What a Character! is a fun website that sells vintage merchandise of any cartoon or movie character you can imagine. It's fun to spend a few minutes just to look at the pictures. Here are three amusing Sylvester toys I found while browsing WAC recently...

Here's what happens when you cross Sylvester with Snagglepuss...

Isn't Sylvester Jr. adorable?...before he gets mauled to death by your dog... 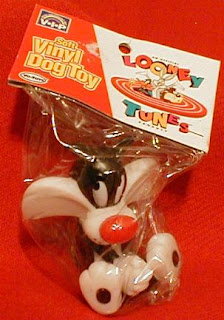 And finally, this Sylvester teaches you about the dangers of anorexia... 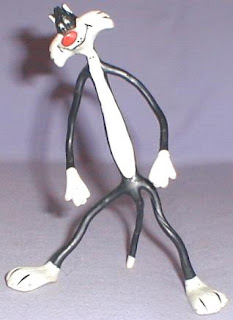 From the "great cartoons that still aren't on DVD" department, here's a funny and often overlooked Bob Clampett cartoon from 1940. It is one of those cartoons that features Daffy at his daffiest. Plus, a music score with songs that will be stuck in your head for days.

To celebrate the fifteenth anniversary of the Happy Meal in 1994, McDonald's ran a promotion where they offered 15 different vehicles that, once hooked together, would form a "birthday train". They really went all out, licensing a who's-who of favorite kids characters who had been featured in past Happy Meals. Ronald McDonald was featured, of course, but so were Snoopy, Barbie, E.T., the Muppet Babies, Sonic the Hedgehog, the Little Mermaid and others. Bugs and Daffy also got their own vehicle (and a quick cameo at the end of the commercial below). When pushed, Bugs would repeatedly smash Daffy's head between a pair of oversized cymbols. Anyway, here's the commercial for the promotion where Ronald and a bunch of familiar faces prepare to celebrate 15 years of greasy goodness. 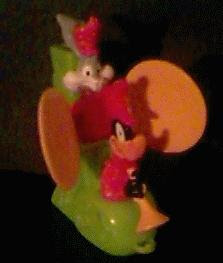 Hey, remember this? I know it brings back memories for me. It's the short animated intro that was on the Looney Tunes "Golden Jubilee" VHS tapes from the mid-1980s. In fact, I am shocked we haven't covered this on the blog before.

Here's something clever...someone on Youtube has found the technology to slow down the "chipmunk" voice of the young rabbit in Robert McKimson's Bugs Bunny classic "Rabbit's Kin" to get to the original pitch of Mel Blanc's recording. If you've seen the original, it's darn near impossible to understand the little bunny's jabbering...but here, you can! Pretty cool if you ask me.

Guess what? ANOTHER Road Runner commercial!

I think it's now safe to say that the Road Runner is probably the most-used Warner Bros. character ever in advertising. Candy, credit cards, cars, food, batteries, soda, and the list goes on, and on, and on. Here's his latest appearance, again for Time Warner Cable's Road Runner Internet service. It's actually a pretty clever ad. Too bad it's impossible to find a Road Runner cartoon on any channel Time Warner Cable provides.


Update: Here's another one!

Launch of the WB Network

Here it is, the clip of Michigan J Frog officially launching the WB Network on Jan. 11, 1995 with special appearances by Bugs, Daffy and Chuck Jones, himself.

Back in Action Sprint Commercial

Somehow I must have missed this commercial for Sprint cellphones when it originally aired back in 2003.

Normally I wouldn't talk about a 1930's MGM cartoon here. For the most part, I detest them. Hugh Harman and Rudolph Ising left Warner Bros. in 1934 to pursue greener pastures (and greener wallets) at MGM, and set out to copy Disney. One of their first efforts starred Bosko, in his original WB design, in color cavorting and singing in Mother Goose-land. I had never seen it until today, and I was rather disappointed. Bosko lost his edge. He's no longer funny here, at all. After this, they'd do one or two more Bosko cartoons using the traditional design, then morph him into a stereotypical black kid in a fomulaic series about him trying to keep a bag of cookies away from evil frogs.

Just when you thought we had posted every single Road Runner commercial ever made... we dug up another one. Who knew they were issuing credit cards to roadrunners?

In reply to Matthew's previous "Coyote Welding" post, reader Jim sent in this picture of a dentist's office in Paddington, Australia. 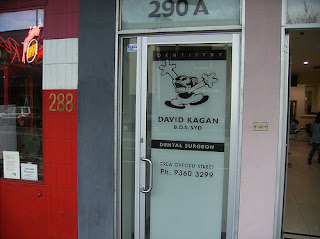 Here's an ad I stumbled upon by accident in the Austin, TX yellow pages. Apparently Mr. Rudy Escobar never heard of copyright infringement. I do believe that the gas tank to the left of "Wile E." looks a little like, uh, well, you be the judge!

Bugs Stays at the Holiday Inn

Let's travel back to 1990 again for yet another tie-in with Bugs' 50th birthday. Here's a commercial for the Holiday Inn where Elmer and a goon from a rival hotel are attempting to capture Bugs (since nobody is staying at their hotel since everyone wants to be at Bugs' bash at the Holiday Inn). Note that Elmer is made even less menacing than usual by being armed with a cork gun.