The town of Portis, Kansas has a limestone memorial dedicated to Millar and Porky Pig: 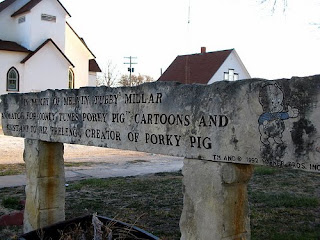 (Image from this Flicker page.)
Posted by Jon Cooke at 8:02 AM 2 comments:

Can the Honey Nut Cheerios Bee Save the Road Runner?

From the 1980s, will Wile E. choose the Road Runner or Honey Nut Cheerios?? Yes, you read that correctly.

The classic Looney Tunes shorts are returning to Cartoon Network this Sunday. The return kicks off with a six-hour marathon from 1pm-7pm (ET, PT). Starting the following day, CN will run an hour of Looney Tunes each weekday from 11am-noon (ET, PT). A schedule of shorts isn't available yet, but I will update when it does. So, cancel all your plans for Sunday and enjoy the return of Bugs, Daffy, Porky and friends.

UPDATE: A partial schedule is now available, I have posted it on the Golden Age Cartoons forums. CLICK HERE

Below is a promo the network has been running for the Sunday marathon. It pokes a little fun at the characters' absence from the network in recent years.

Love is in the Air

Remember earlier this year when the state of New Mexico had a float in the Rose Parade featuring the Road Runner and Wile E. Coyote? Well, the state's float for 2010 will feature another Chuck Jones creation: Pepe Le Pew! 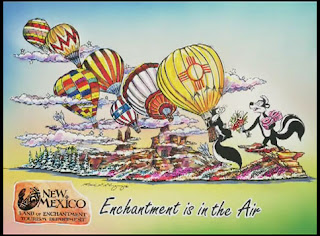 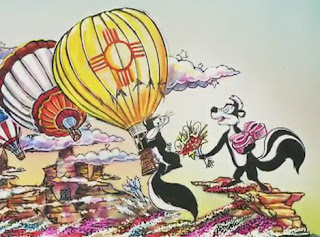 You can see the video of the float design's unveiling onYouTube.
Posted by Jon Cooke at 1:51 PM No comments:

It looks like Bugs Bunny will be returning to TV soon. I am waiting to get some more information to pass along here and on the GAC Forums, but Looney Tunes are now showing up on various TV listings as airing on Cartoon Network starting on November 15. Stay tuned!

In the meantime, here's the introduction to Merrie Melodies Starring Bugs Bunny and Friends a compilation show that aired on Fox in the early 1990s. This fast paced intro was done by Darrell Van Citters' crew and features a number of cameos by both major and minor favorites from the Looney Tunes universe. If it looks familiar to you, it was later reused (with different theme music) by Kids WB for their own show called That's Warner Bros.!.

It's that time again! Another Road Runner and Wile E. Coyote commercial!

Just when we thought there couldn't possibly be any more commercials out there featuring Wile E. Coyote and the Road Runner, Jon found this little gem buried in an ancient commercial break posted by a Youtube user. I've made it easier for everyone by editing the other ads out and isolating it for your viewing pleasure.

Wile E. Coyote discovers that the Donnelly Directory Yellow Pages have "Every number for every service". At least, they did when they existed back in 1988!

Dance to the Beat of Looney Tunes!

Hey, it looks like Mise-Looney-ous is showing some signs of life again! To keep the momentum going, here's a follow-up to the hilariously awful album cover Matthew posted the other day. Thanks to reader Silvia Santis who e-mailed us the following. Yes, there was another one... 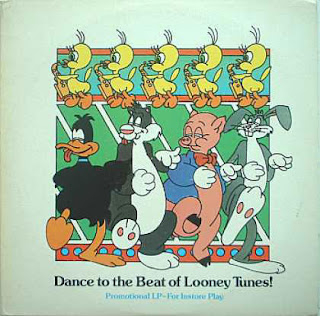 I Fought The Claw...

...And I won! I got lucky at the the claw machine in my local grocery store today and managed to snag 2 nice looking Looney Tunes characters, each on the first try. Each is about 12 inches tall. Total cost: $1.00!

I managed to snag Pepe and Elmer, but there was also a Marvin Martian who was too close to the glass wall to grab. These are brand new, dated 2009, and made by "Sugar Loaf", the company who makes the machines themselves. As a nice touch, the little hang-tag has the characters' name on the back. Helpful, I suppose, for kids who have never seen a Looney Tune. That's probably a lot of kids, sadly.
Posted by Matthew Hunter at 6:24 PM 1 comment:

We've highlighted some ugly artwork and merchandise featuring the Warner Bros. cartoon gang in the past. Over the weekend, Jerry Beck sent me something that makes even the old public domain video covers look like Golden Age masterpieces!

"I'm passing this to you for use on your blog (from Terry Guy) - have you EVER seen this hideous piece?:

Also, Terry Guy's flickr photoset features a bunch of pictures taken at the Museum of Modern Art Looney Tunes exhibit back in 1985:

So, none of it is cartoon music, and I've never gotten around to playing the two discs in the album, but I continue to marvel at the unique representations of these characters."

I will say this for it, it's a funny image, just not in a GOOD way! The Looney Tunes characters playing in a band for a music sampler put out by Warner Bros. is a clever idea, but the drawings look like what might happen if the characters aged 20 years and were stuck playing on a washed-up rock stars nostalgia circuit. Bugs is in need of a facelift, Porky's clearly battling depression and alcoholism, Daffy's years of drug use have rendered him a shadow of his former self, and Sylvester's explosive weight gain is cause for concern. Whey there are five identical Tweeties above them, it's impossible to say...but he's looking a little strung out himself.
Posted by Matthew Hunter at 1:07 PM 4 comments: