Tweety must not have gotten the memo about Looney Tunes characters not appearing on unhealthy snacks. I spotted these two Tweety treats (or "Tweety!" as he seems to be calling himself now) at the local Walgreen's pharmacy last week. First, a Tweety "Candy Popper". You press a button and the candy balls "pop" around inside Tweety's birdcage. Next, a Tweety "Cool Fan Pop". 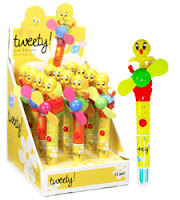 I had a couple brief items to touch on here, and rather than split it off into different posts I figure I'll just put everything in one enchilada.

First off, the Safeway "Eating Right Kids" line seems to be doing fairly well. Safeway stores have been selling "Green Bags" with Bugs Bunny and Tweety on them, and they also have in-store and radio ads featuring the voice of Joe Alaskey as Bugs and Daffy. Listen for the ads on your local radio stations!

Second, here's a fun comparison of animation from the Road Runner cartoon "Zipping Along" with the same animation in the Super Nintendo classic "Road Runner's Death Valley Rally".

And finally, my latest music video experiment combining clips of classic Warner cartoons with modern music. In this case, it's early hip-hop, with Cypress Hill's early 90's hit "Insane in the Brain". See what you think:

It looks like we're starting to see the earliest victims of WB's vow not to license the Looney Tunes characters on unhealthy snacks anymore (as part of their deal with Safeway's "Eating Right Kids" campaign). First, there were no signs of any new Looney-themed Russell-Stover treats for 2008's Christmas season. Now here's the 2009 edition of Adam & Brooks, Inc.'s Valentine's Day "Luv Pops". For the past couple of years, these heart-shaped lollipops came in packaging featuring Pepe Le Pew & Penelope. I had to do a double take when I saw this year's version on the shelf... 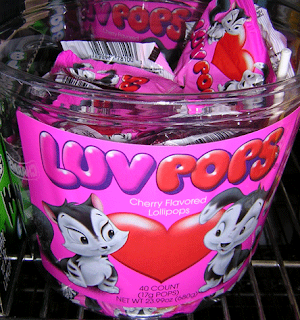 Doesn't that pup look more than a little like a certain skunk at first glance? (Compare to Pepe packaging here).
Posted by Jon Cooke at 7:13 PM 1 comment:

A long time ago, we posted an entry on "Timber Wolf", the series of Flash-animated shorts created for Warner Bros. They turned out to be the final animation project Chuck Jones was ever personally involved with. While rummaging through a box at my parents' house over the holidays, I came accross this fun relic: a promotional sticker for the series from 2001. This was sent to me by Jerry Beck of cartoonbrew.com, along with a copy of "That's All Folks", a double-disc CD compilation of music from classic Looney Tunes, when I won a trivia contest.

Wisely enough, I never stuck it to anything. It's still on its original wax-paper backing. That's good for you blog readers, because now I can scan it and share it with everyone!

Here's something that's become quite a rarity lately: a Cool Cat cartoon. This later Looney Tunes star, created by Alex Lovy, had the honor of being the vehicle for the very last theatrical Warner Bros. cartoon in 1969, "Injun Trouble". It's notable that that cartoon and this one were both directed by Robert McKimson, and were problably the hipster tiger's most enjoyable films.

Cool Cat is widely reviled among hard-core Looney Tunes fans, and the Hanna-Barbera-esque animation of his cartoons may be the main reason. But this particular film, taken by itself, is great fun, and veteran Warner TV comedian Larry Storch does a perfectly adequate job as the voice of Cool Cat.

I can think of a few cartoons from the true "Golden Age" that were less enjoyable than this simple sports romp.
Posted by Matthew Hunter at 6:58 PM No comments:

Here's an animated commercial for a product we've mentioned before. In the mid 90's, Welch's Jelly licensed the Warner Bros. characters for two series of jelly jars that could be reused as small drinking glasses. Yes, I collected nearly all of them, and thought they might be of some value someday. They were so common that they never generated much collector interest even 15 years after the fact...but they were fun.

Here's a commercial from 1989 for the "Looney Tunes Library", a series of mail-order VHS cartoon collections (identical to the "Golden Jubilee" series of tapes sold in stores.) Note the introductory price of $9.95...and the tapes usually had only 6 or 7cartoons!

Looney Tunes New Years' Day Marathon: A Review and Some Stuff You Missed

As we reported before, Cartoon Network ran a 14-hour marathon of Warner Bros. cartoons on January 1, 2009. I will be sure to keep an eye out for a ratings report, as the ratings for this marathon may determine the future of Looney Tunes on CN (or on TV, period.) On a side-note, it's been reported by members of the Termite Terrace Trading Post that the Comcast Cable service has begun offering "Looney Tunes On Demand" as part of their free kids' programming. A good move, though I don't understand why Comcast, and not Time Warner's own cable service, gets to do the honors.

Anyway, my review of the marathon, followed by a special treat:
-----------------------------------------------------------------
I honestly can't remember the last time I watched TV for NINE hours (sorry, no 6AM for me), voluntarily, and enjoyed it as much as I did today. Every cartoon they showed was a true classic, and there were many of them that I hadn't really watched in far too long. Someone at the Cartoon Network, (and God bless 'em whoever they are), really knew their classics (or did their homework to find out). There wasn't a bad cartoon in the bunch, period. The very best from Freleng, Clampett, Jones, McKimson, and even a dash of Davis and Tashlin. All the big ones: "Operation Rabbit", "Devil May Hare", "Birds Anonymous", "Hyde and Hare", "Rabbit Hood", "Hair-Raising Hare", "Ready, Set Zoom", "Louvre Come Back To Me". Then they went into the finale, And what a finale...the last hour was nothing but the best, entirely uncut...five Chuck Jones masterpieces and a Friz Freleng Bugs Bunny opus. I could read the list of titles 'til the cows (er, rabbits) came home, but I had forgotten just HOW good all of these were, and how much fun it was to just sit and watch them unfold on live television.

There were few edits here and there, a few bad prints, but there were several shorts with once-cut stuff replaced ("High Diving Hare"), and a few with improved print quality ("Wearing of the Grin"). There were only four cartoons that made me angry, in fact I was offended. I missed the final minute and a half or so of "Show Biz Bugs", only to find that I hadn't missed it, because it wasn't THERE. That's like showing "Old Yeller" without the ending. Sure, it's violent, grim and surprising, but cut it to make people feel better? You just don't DO that. "Scaredy Cat" was horribly mutilated, and not just the suicide gag this time...they ran that one through a woodchipper! "For Scent-Imental Reasons" was also butchered, to remove the Pepe-threatening-to-shoot-himself-while-Penelope's-behind-the-glass bit, but also a bit of Pepe's dialogue before he jumps out the window into the paint bucket....not sure why they felt the need for that. "Dripalong Daffy", too, had that ridiculous removal of Porky's final line. I seem to remember Cartoon Network saying Warner Bros. itself made that cut for some foreign market and fixing it around 2003 or so...but it reared its ugly head today.

Other than those four shorts, I didn't see anything tampered with. There were other edits, but nothing surprising. The only thing that would have made this marathon better would have been the remastered DVD prints of these shorts...but since I own all six volumes of those, I ain't complainin'.