For part three of this series showcasing rare Warner Bros. art that has surfaced recently, let's take a look at some cels. These are highly sought after by collectors, and for the most part, very rare. Cels are inked and painted on sheets of clear plastic, called celluloid, traced from the animator's drawings. The inking is done on the front, while the paint is applied on the back, allowing for the cleanest lines possible. The cels are then laid over the background and shot frame by frame under the camera. The reason for their rarity is twofold: at the time, they were thought to be useless after a cartoon was made. With thousands needed for one 7-minute film, purchasing the amount of celluloid needed was expensive, and to save money, they were wiped clean and reused. Several Golden Age animators, notably Chuck Jones, got their start at various studios as cel washers.

The cels that still exist today were saved by the animators and producers themselves, often given away as gifts and promotional material. The Disney studio, for example, would offer them for cheap sale at Disneyland. Leon Schlesinger signed them and gave them out. Tex Avery recalled giving cels to local kids. Mel Blanc used them to sign autographs. As evidenced by a couple of the cels I'm presenting here, animator Virgil Ross would sign them and give them as gifts. So they ARE out there, and while they fetch thousands of dollars on the collectors' market today, they're an incredible glimpse into the history of animation...and thankfully, photos of them on the internet don't cost a dime! 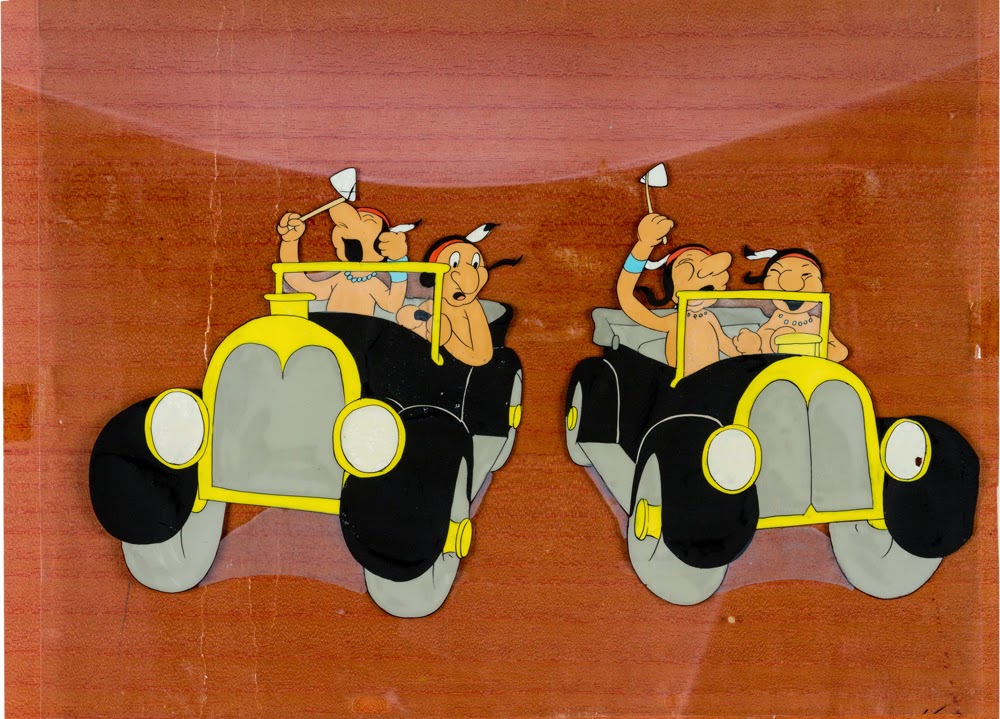 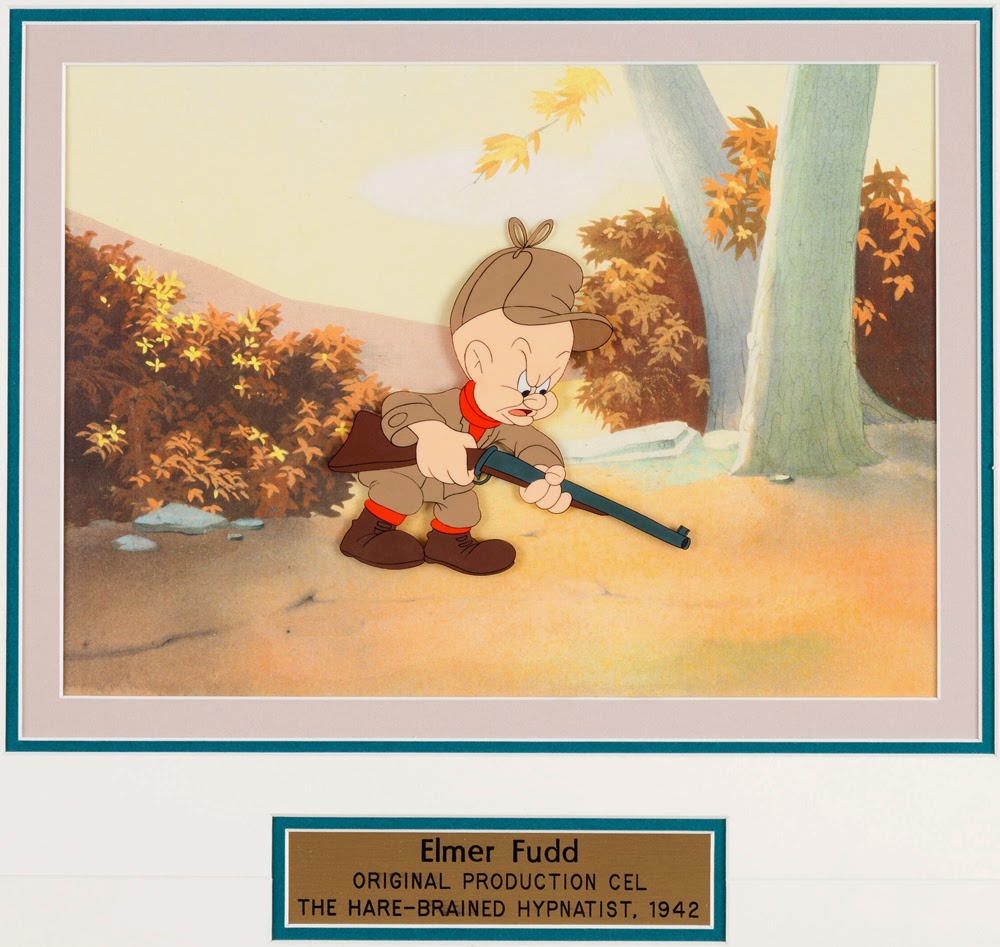 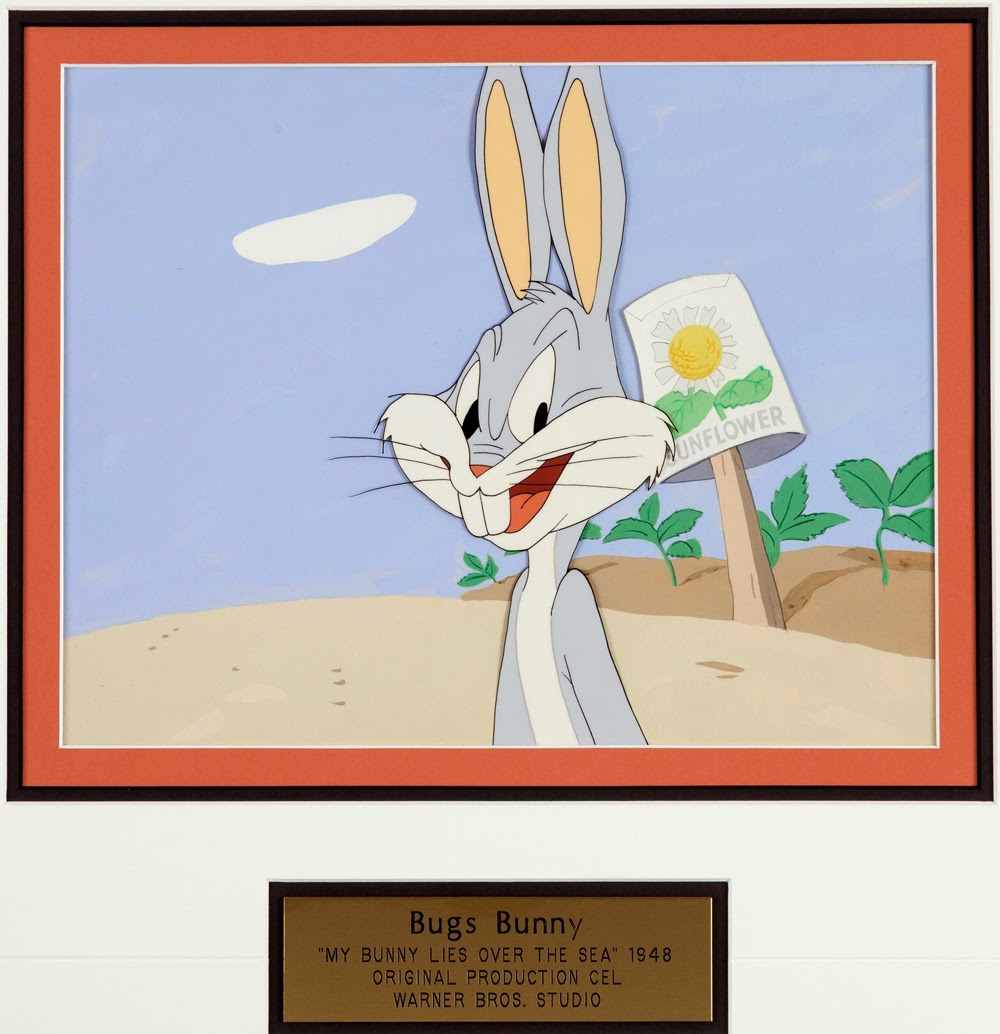 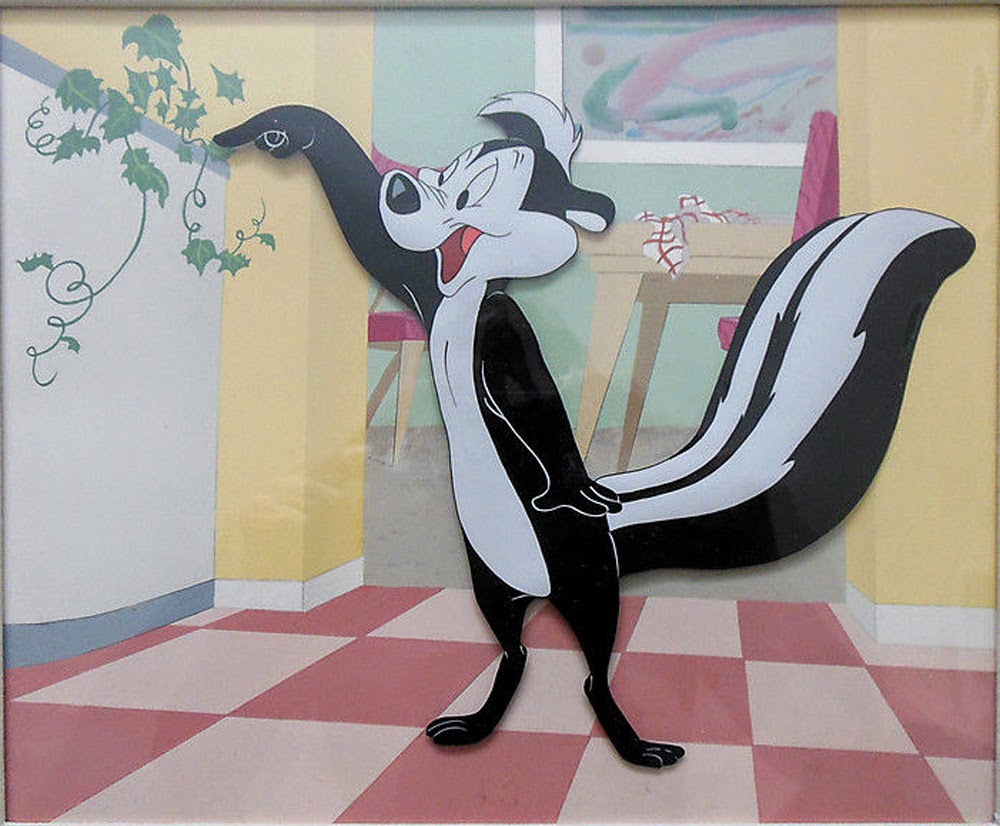 Cel of the Road Runner from "Zipping Along" (Chuck Jones, 1953)*.(Possibly misidentified. This looks to be from a later Jones short. the Roadrunner became more streamlined as time went on, and "Zipping Along" features a more detailed, earlier design.) 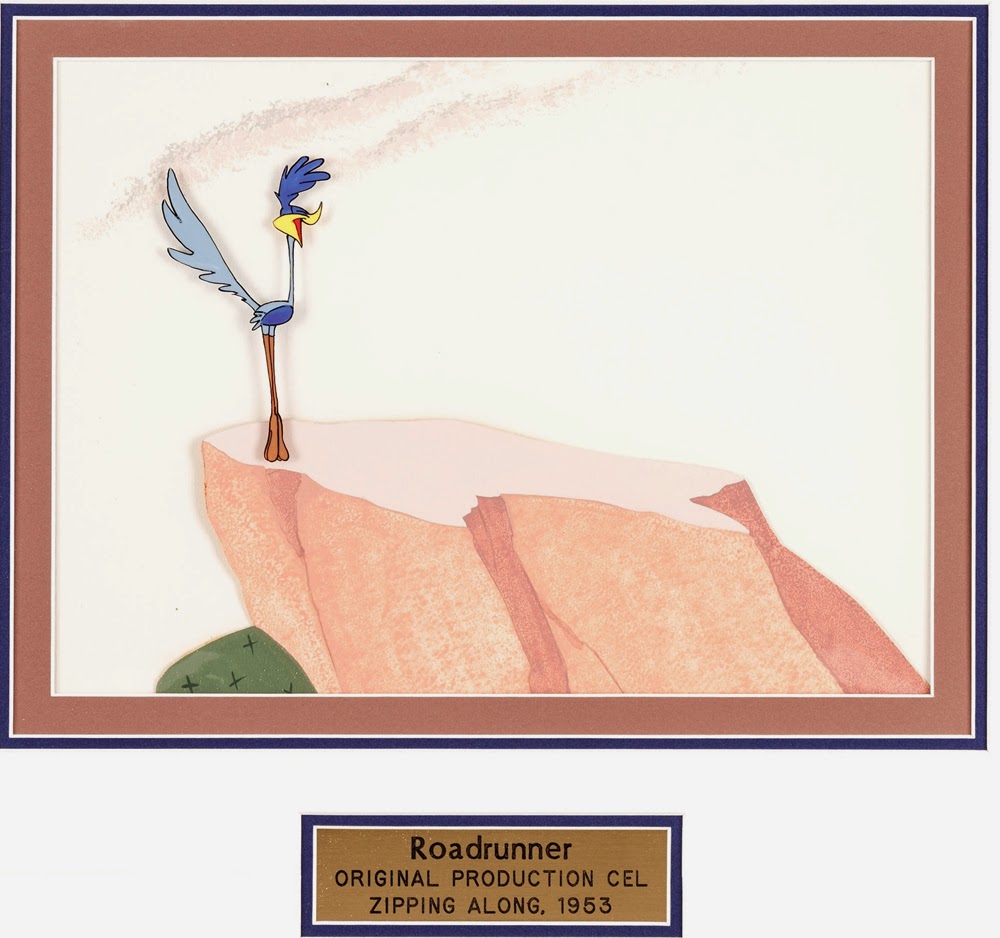 * Confirming my suspicion is cartoon expert Chase Pritchard, who identified this cel as being from "Rushing Roulette", a Robert McKimson cartoon from 1965. Here's a frame from the actual cartoon to prove it. Good eye, Chase! (the background, on the other hand, is definitely from a '50's Jones effort. 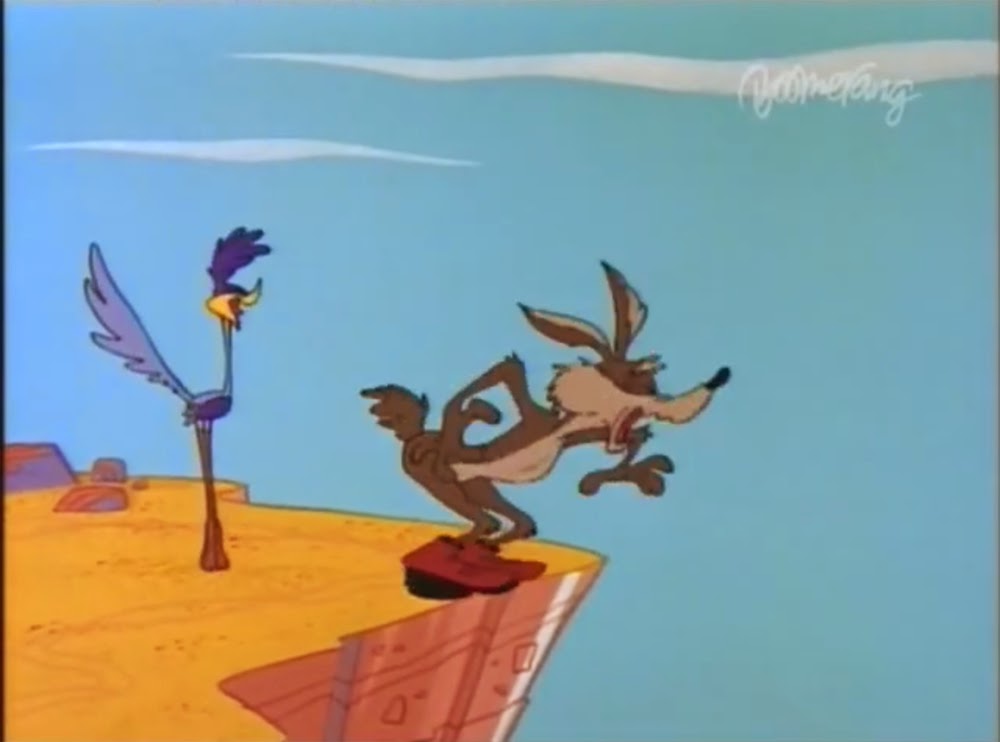 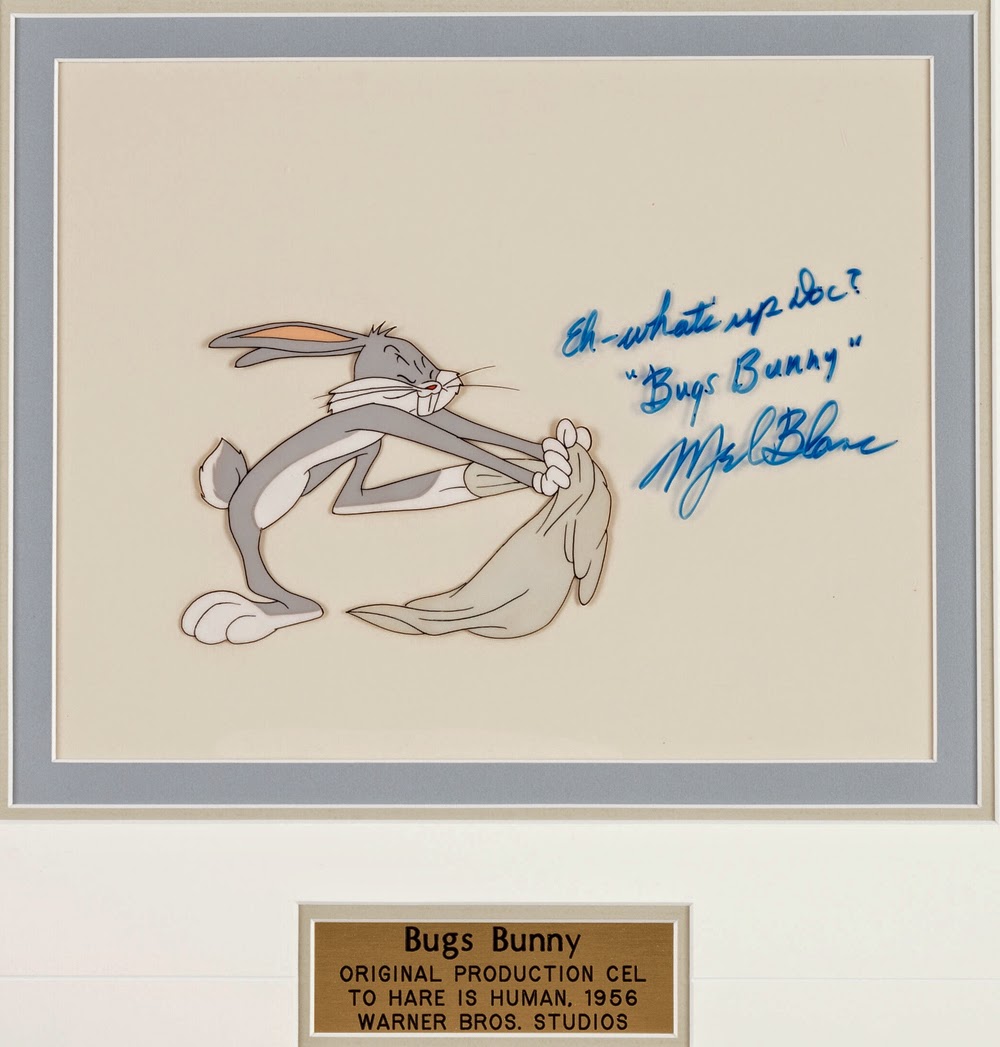 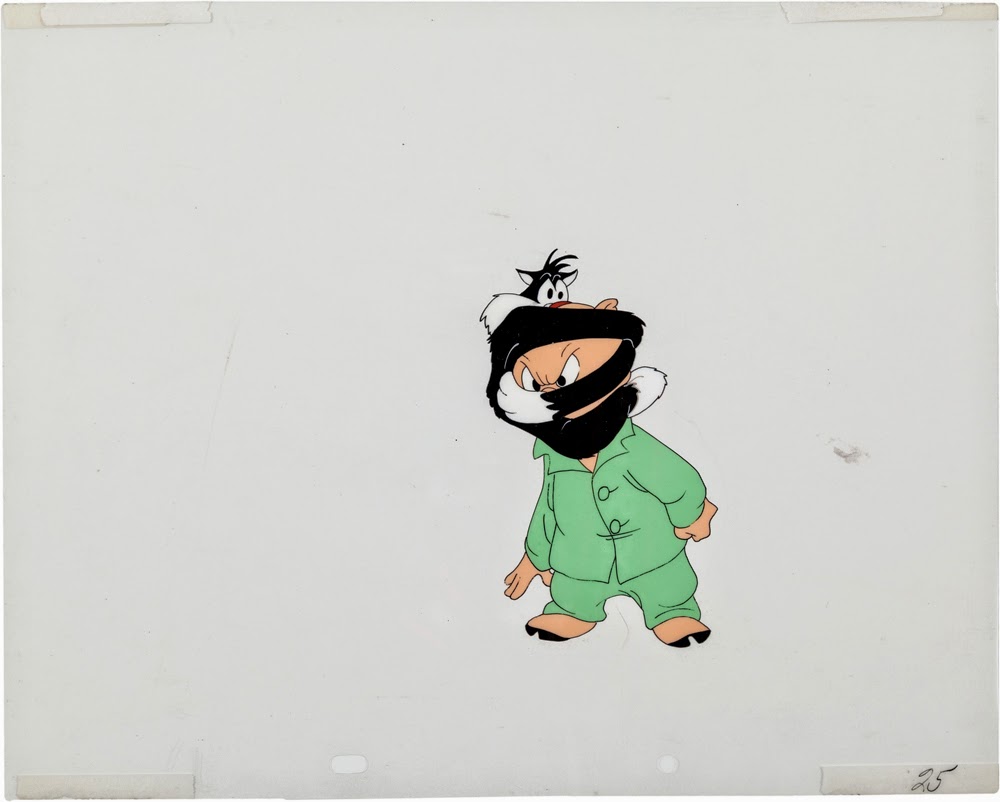 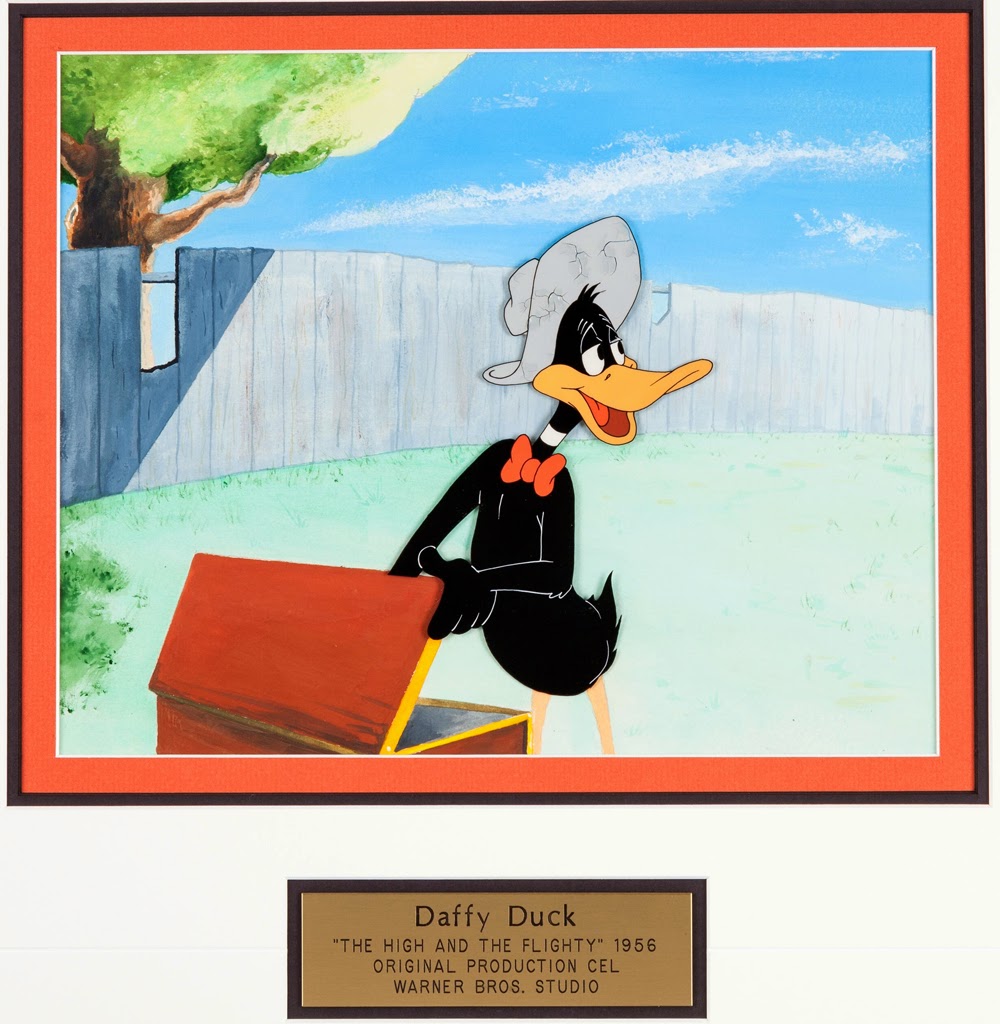 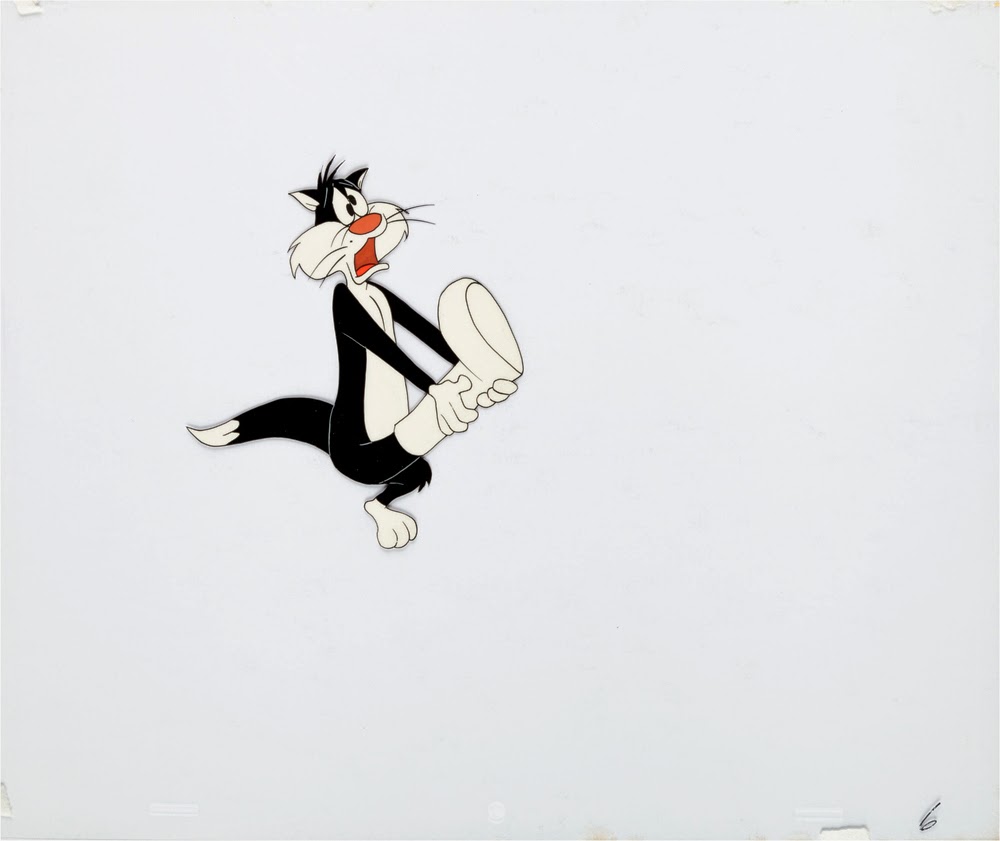 Cel of Miss Prissy from "Of Rice and Hen" ( Robert McKimson,1953) paired with a cel of Foghorn Leghorn from "Weasel While you Work" (McKimson, 1958). 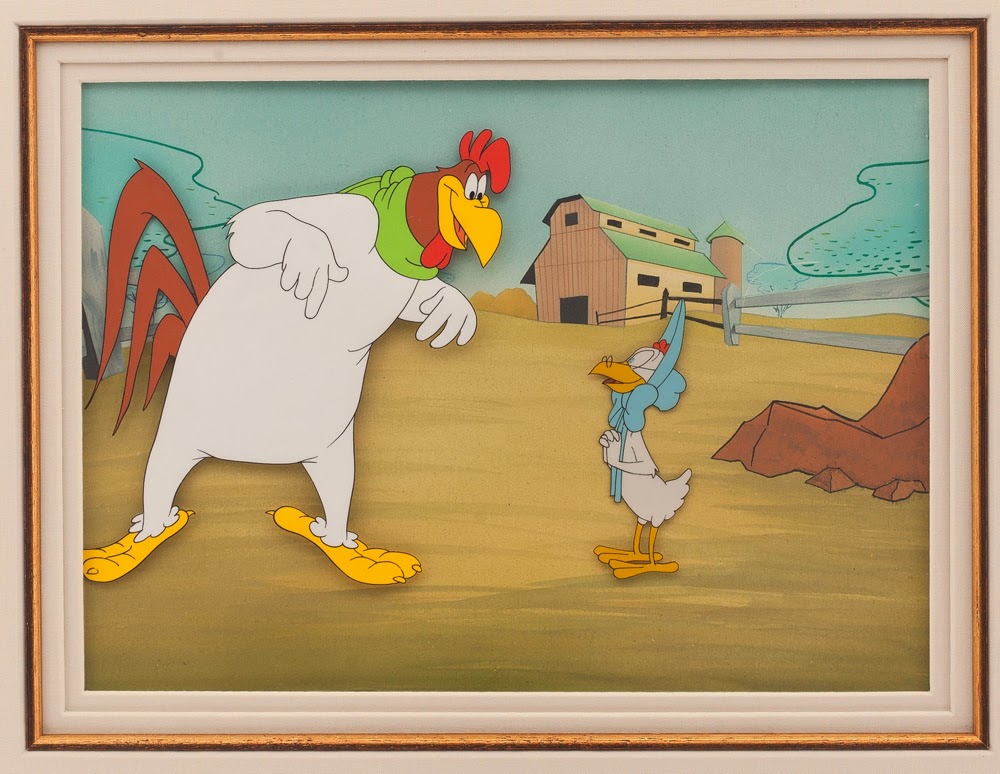 Cel of Sylvester from a 1950's McKimson Hippety Hopper short. * Thanks to the keen eye of reader Matthew Yorston, we know that this cel comes from "Lighthouse Mouse" (Robert McKimson, 1955). 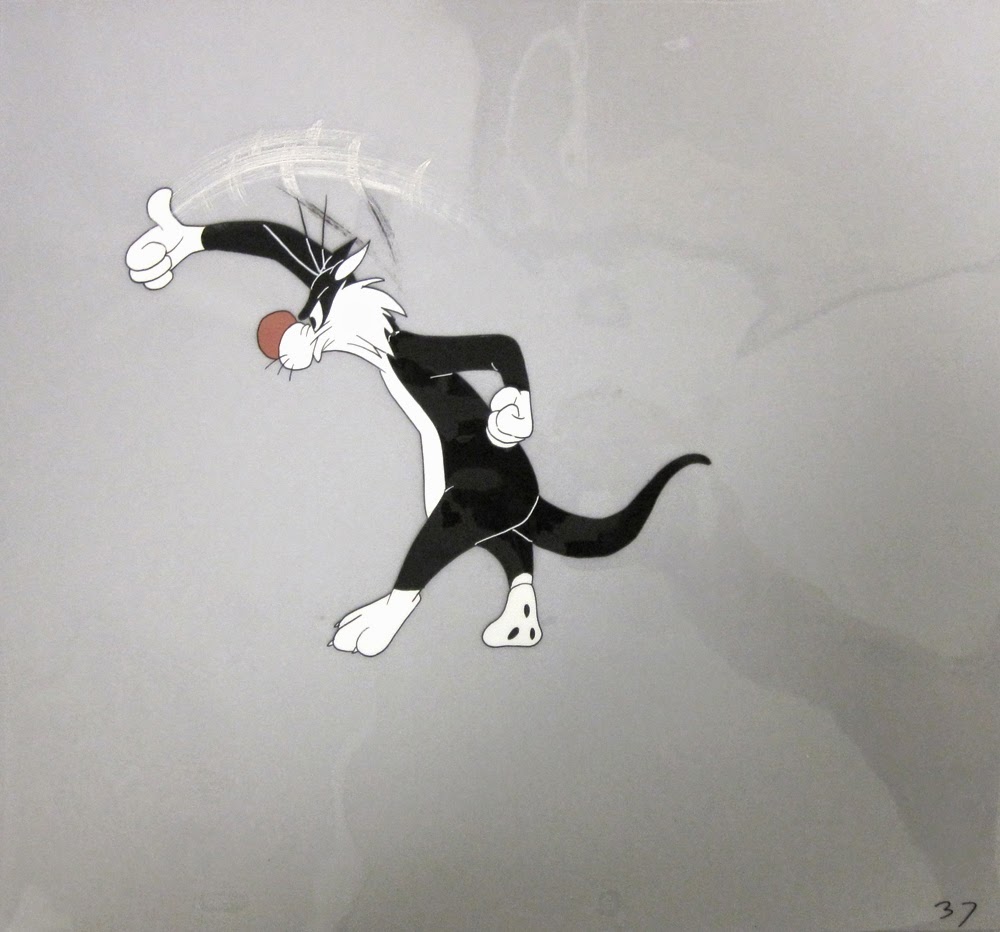 * Here's the frame from the actual cartoon to prove it. Thanks, Matthew! 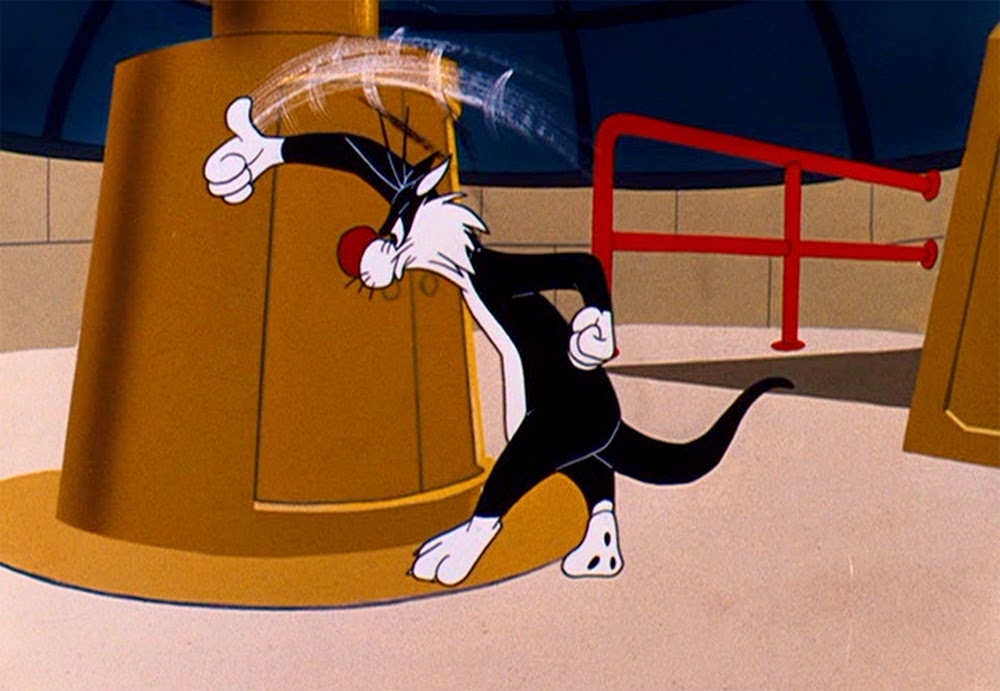 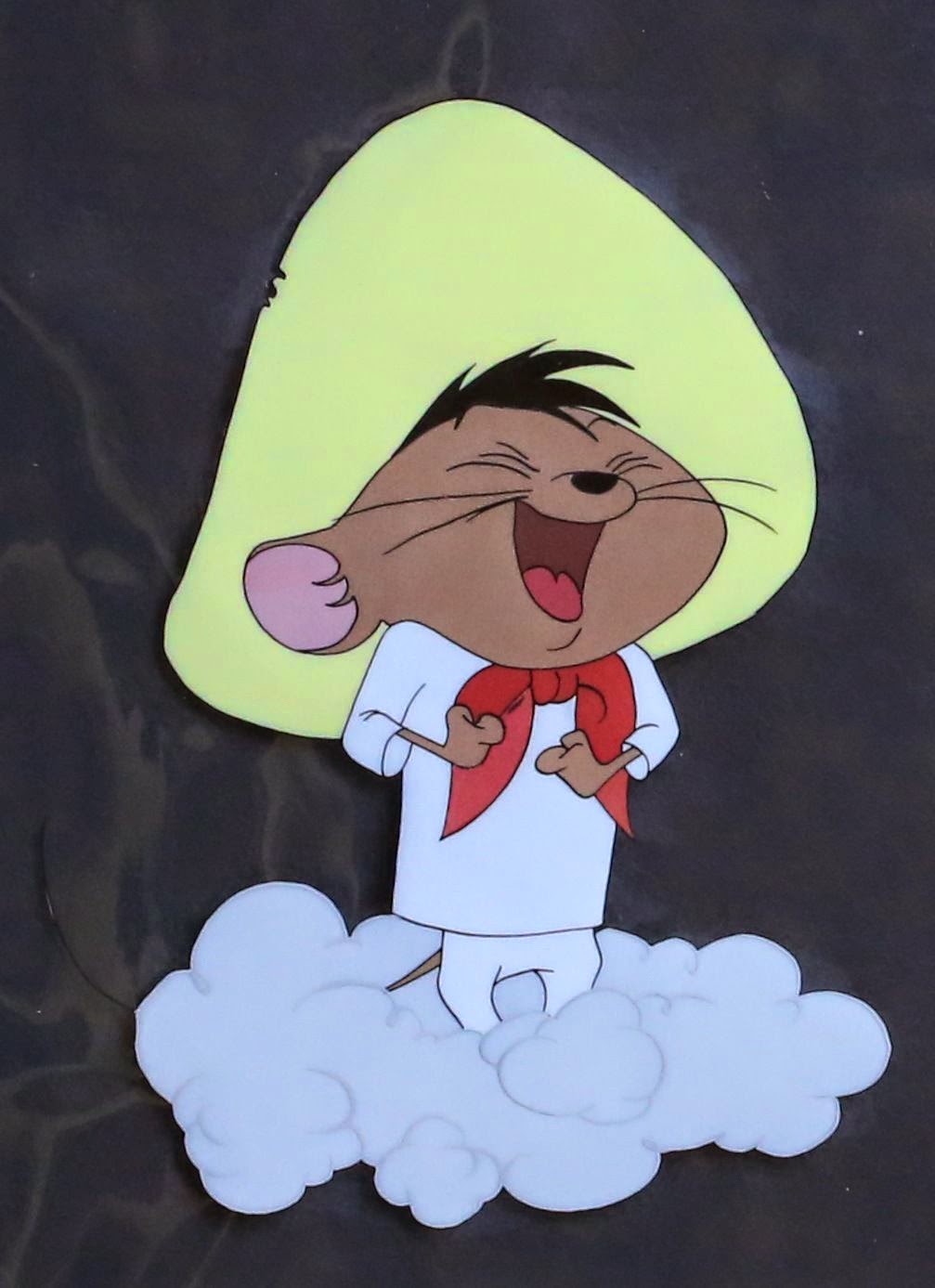 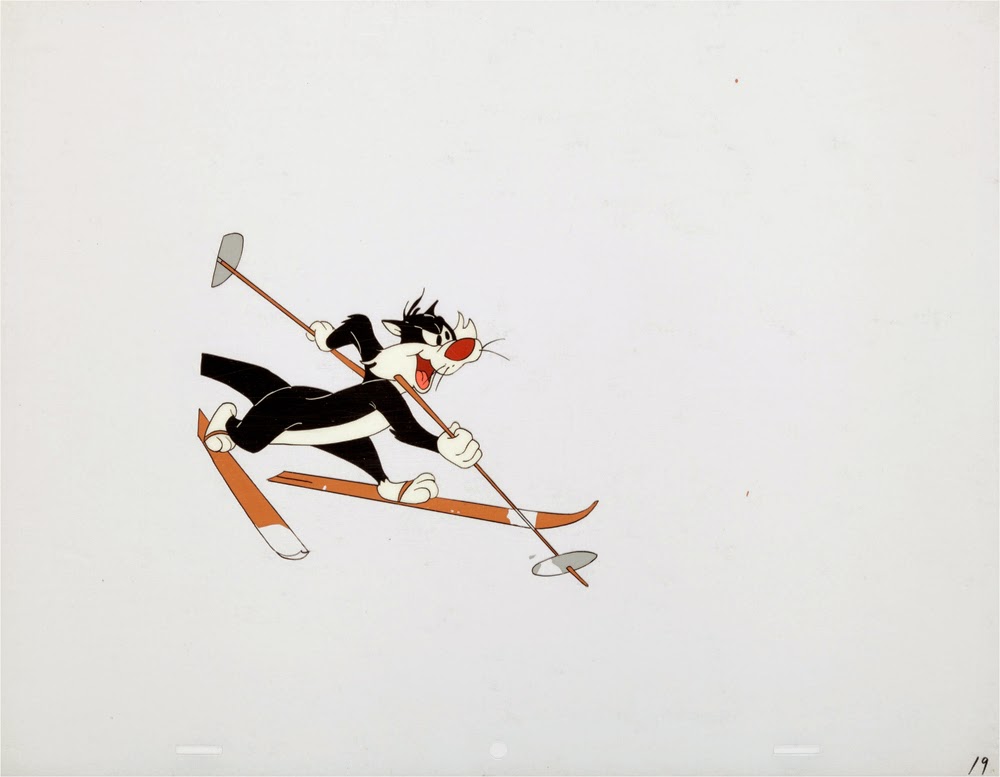 Cels of Bugs Bunny and Daffy Duck from "The Bugs Bunny Show" (Circa 1961). Note the Daffy Cel: Heads and bodies were often painted on separate cels in later years to save time and money. 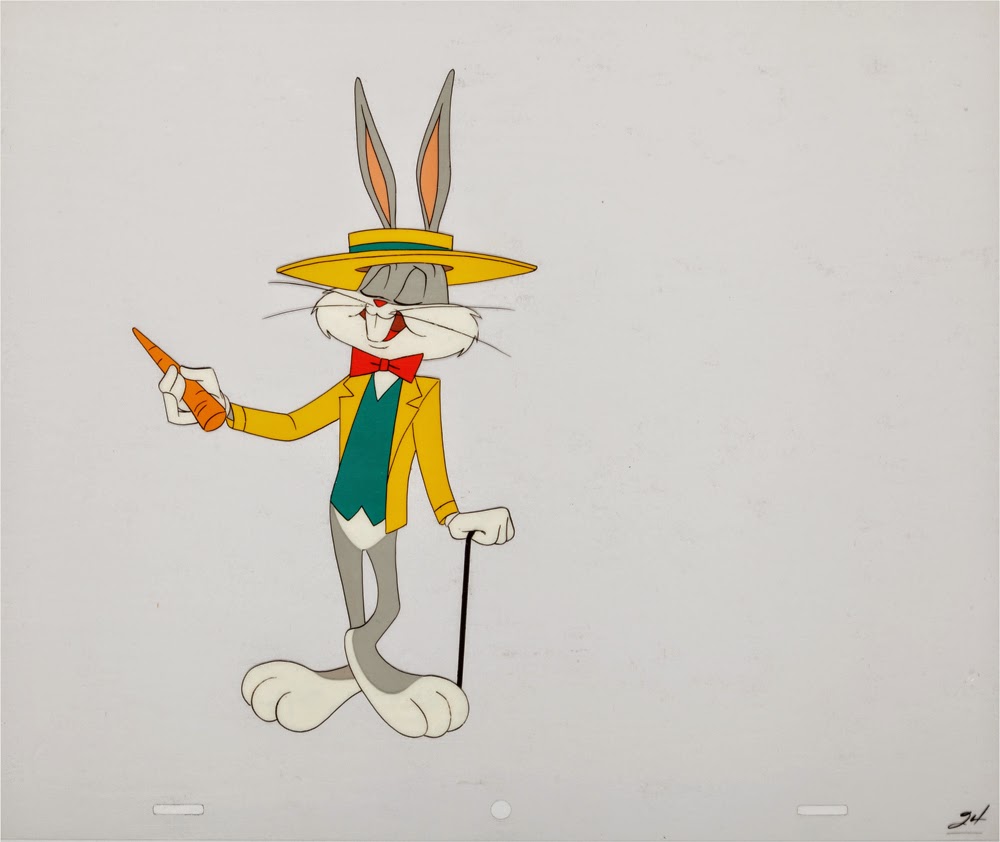 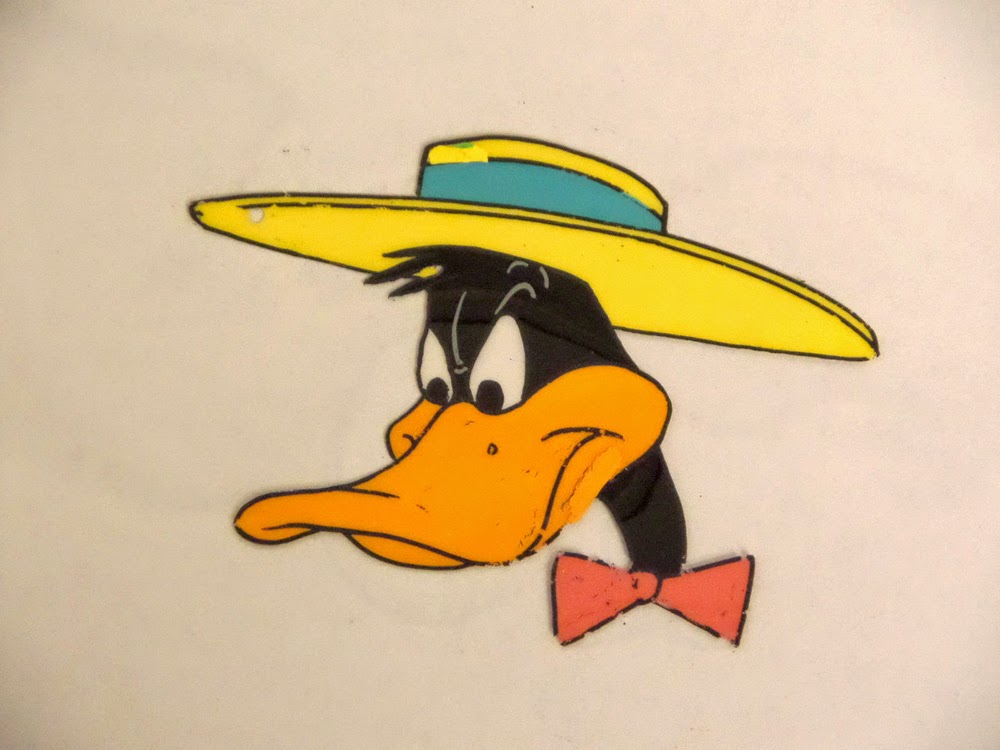 Cel of Sylvester Junior from "Birds of a Father" (Robert McKimson, 1961). 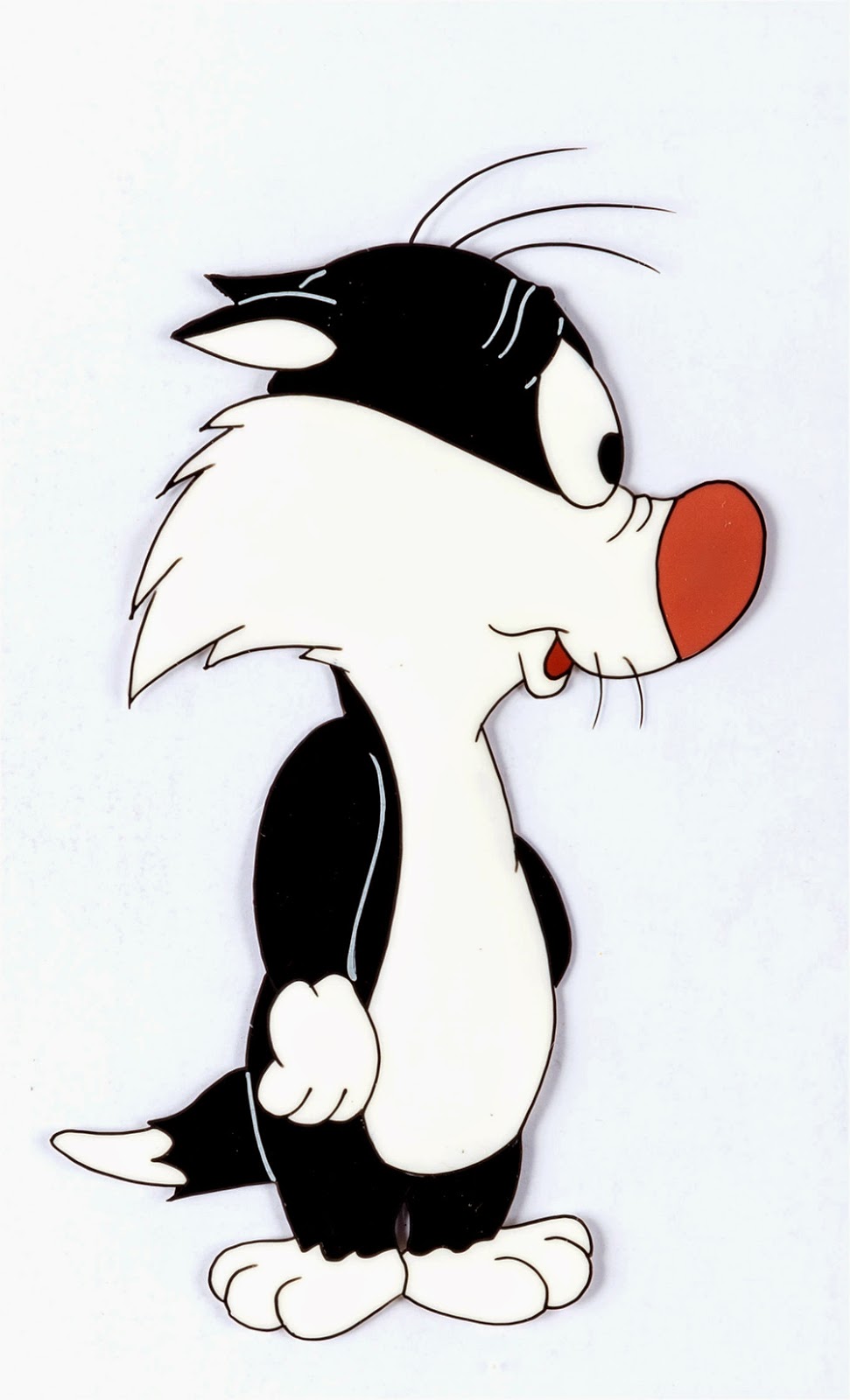 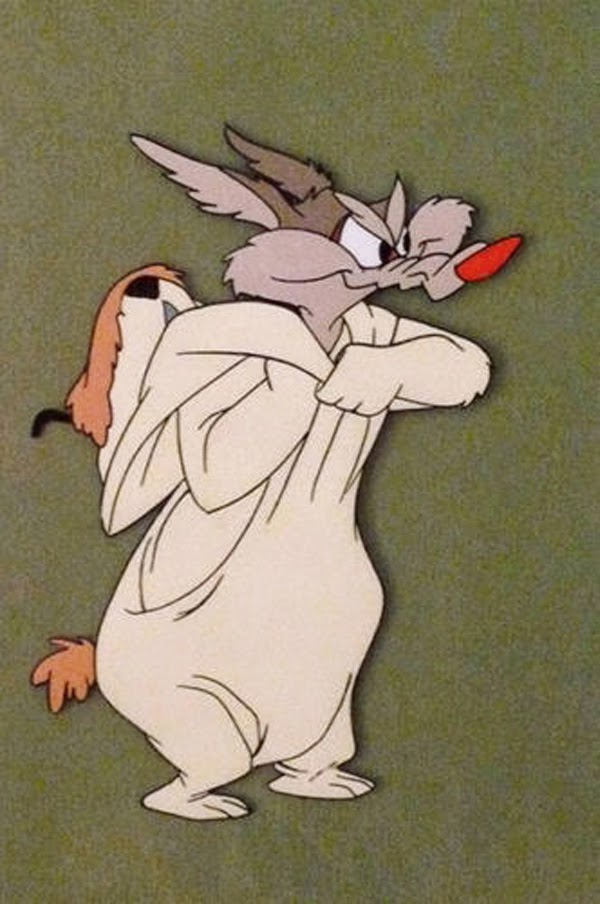 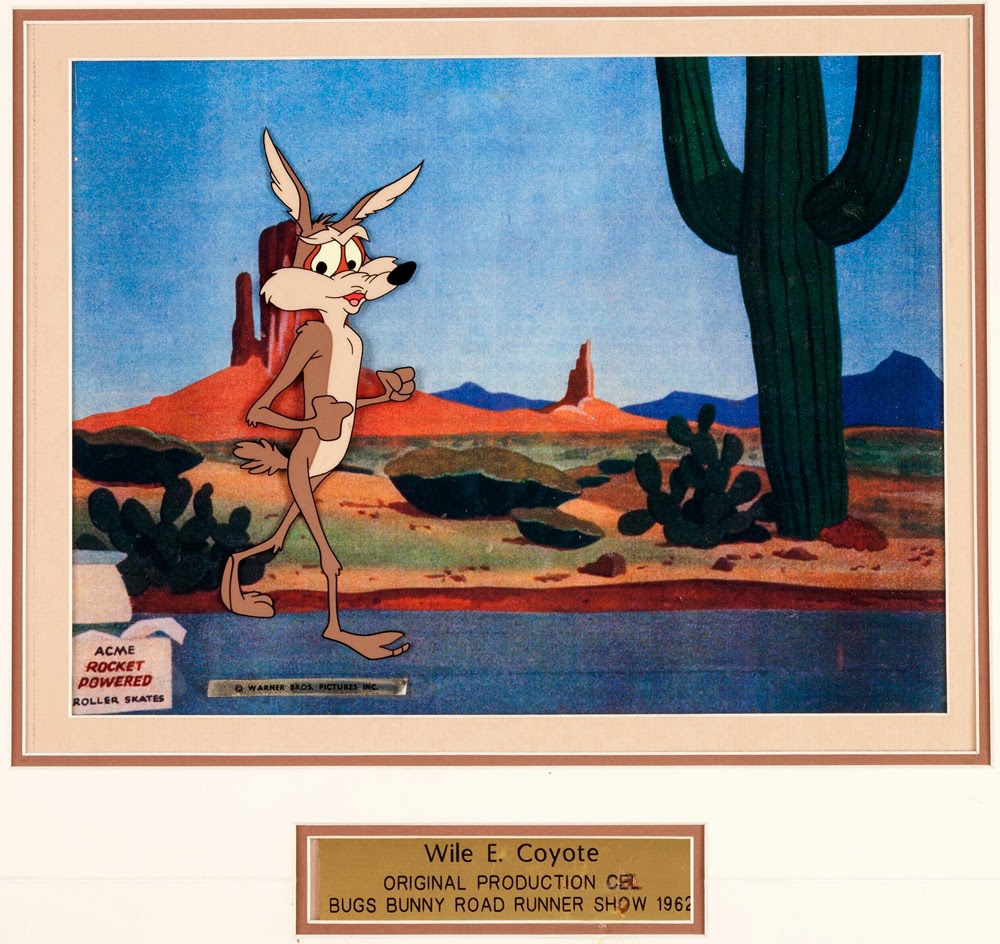 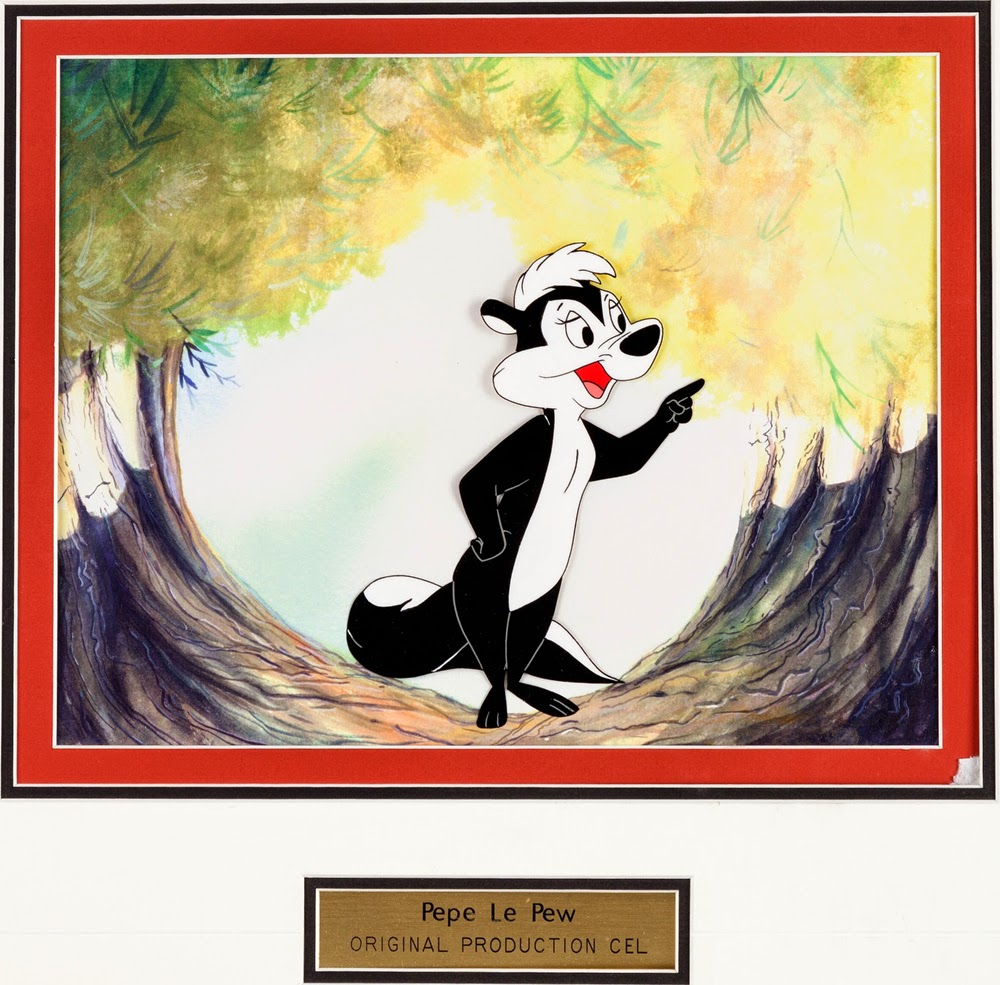 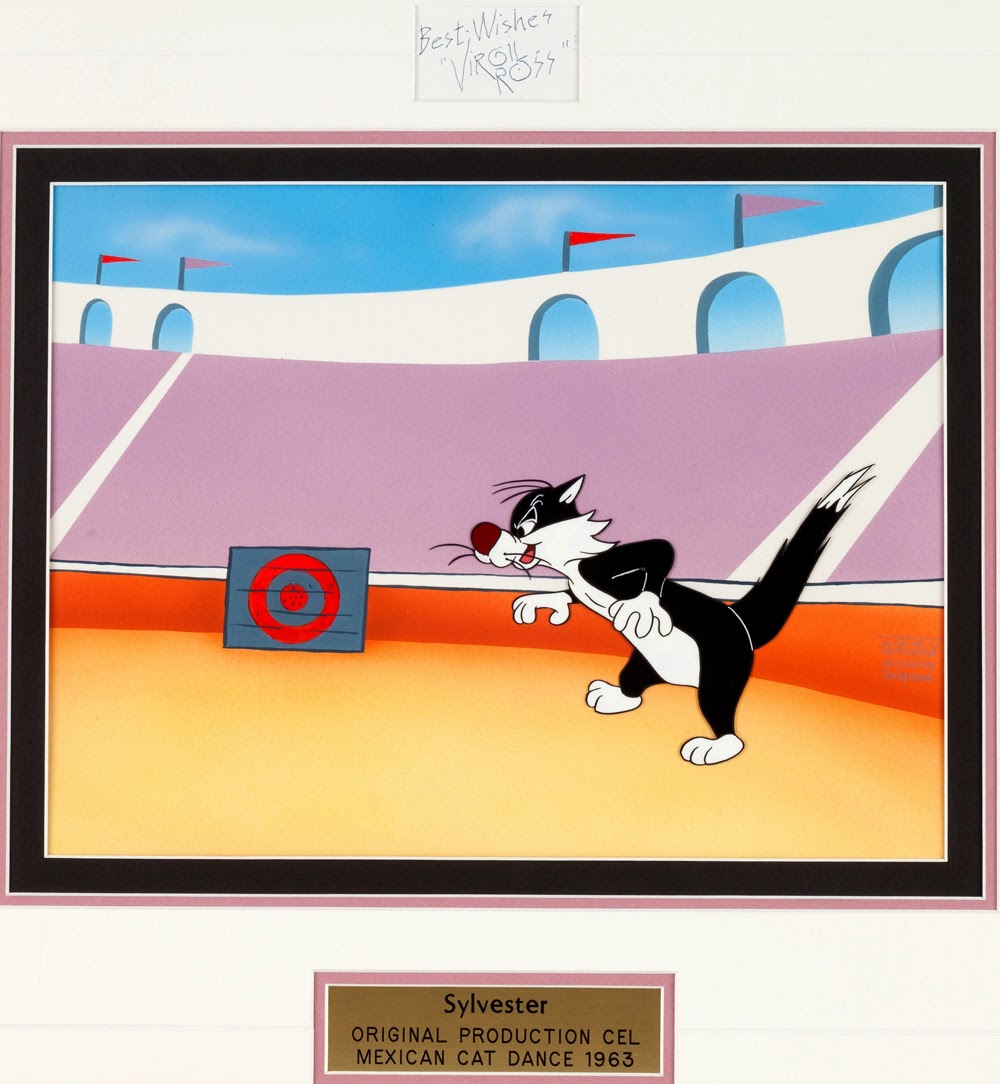 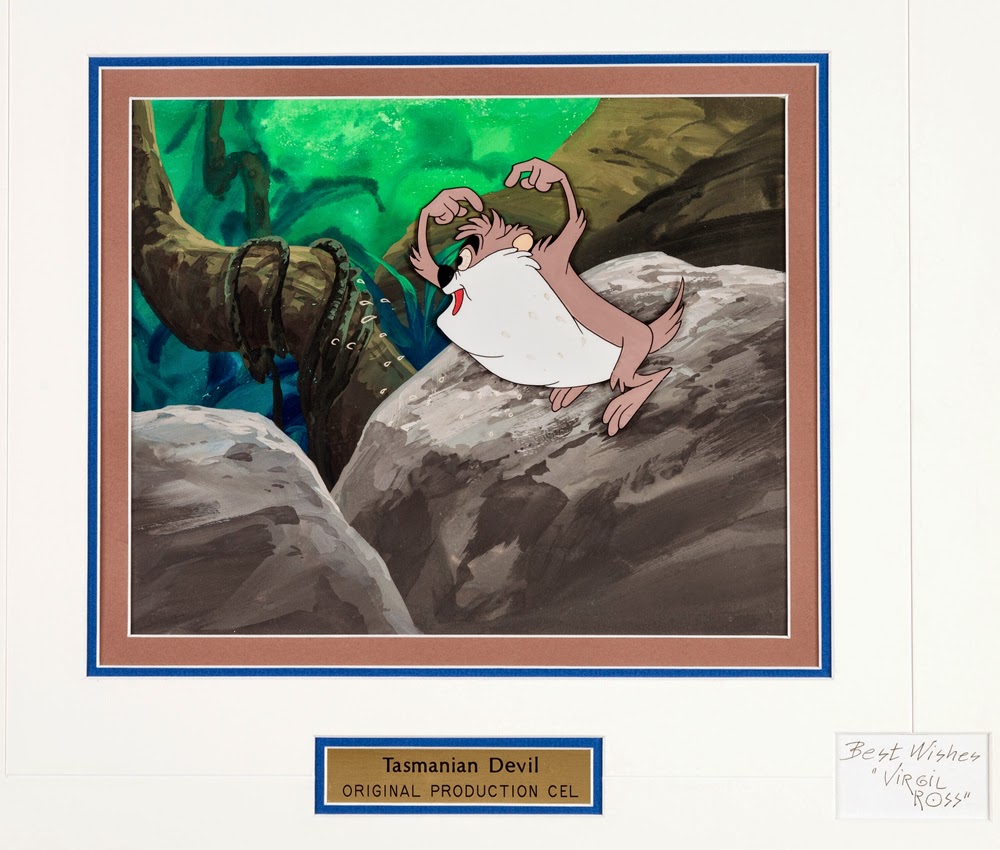 Cel of the Road Runner disguised as Wile E. Coyote, from a 'Road Runner Show" TV bumper directed by Robert McKimson, circa 1965. 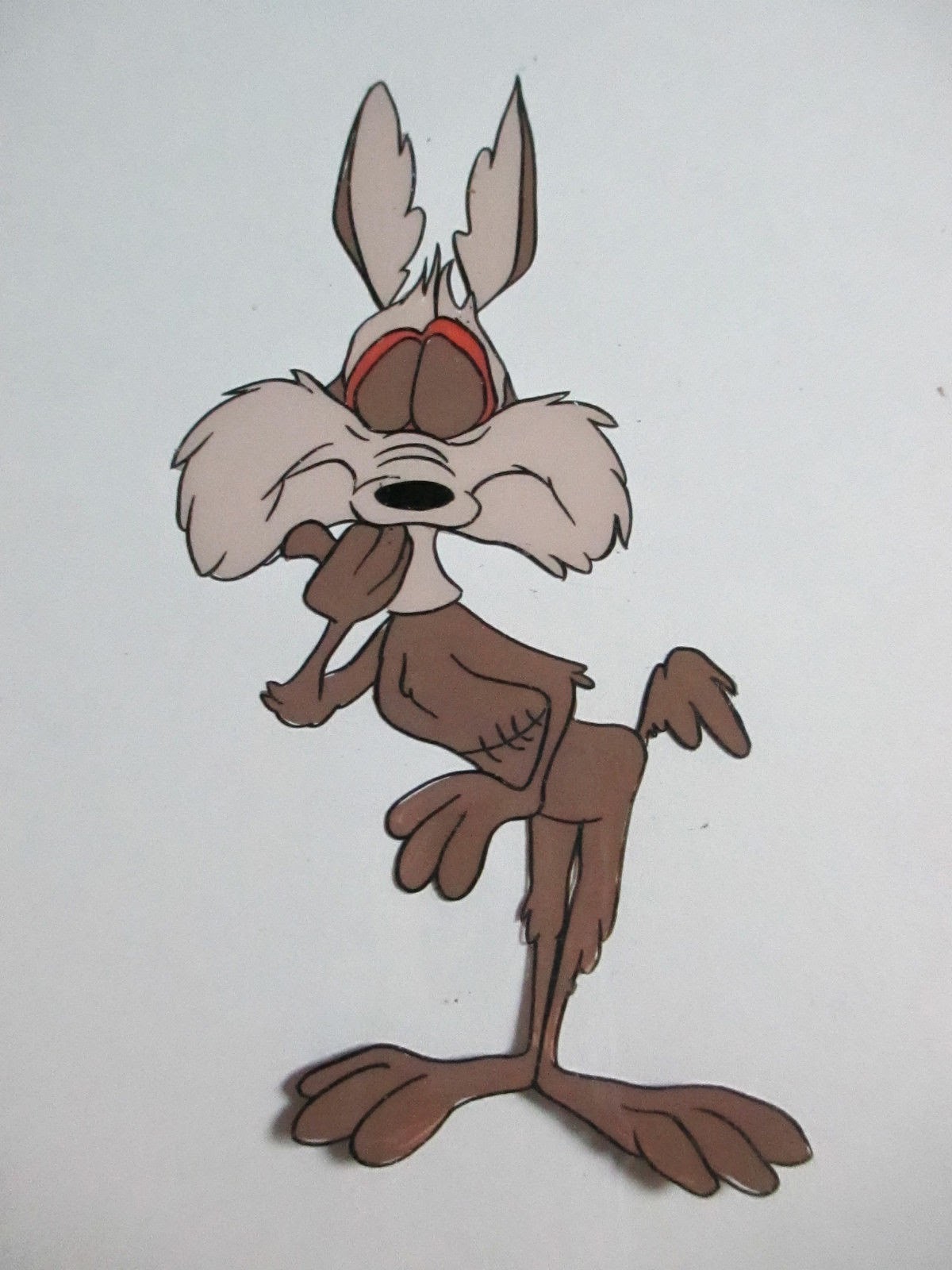 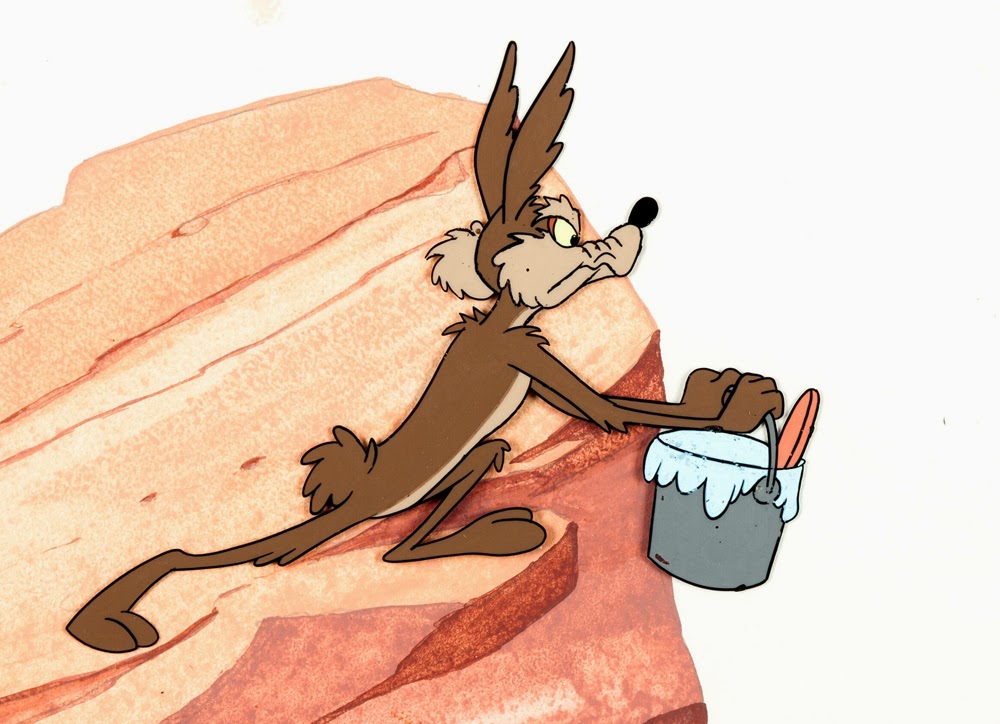 A pair of Daffy Duck cels from a Robert McKimson Daffy/Speedy Gonzales short, mid to late 1960's. * Thanks again to the keen eye of Chase Pritchard, we know these cels come from "A Taste of Catnip" (McKimson, 1966). Frames included below for comparison. Notice that the second cel is missing Daffy's bill...it was animated on a separate cel. 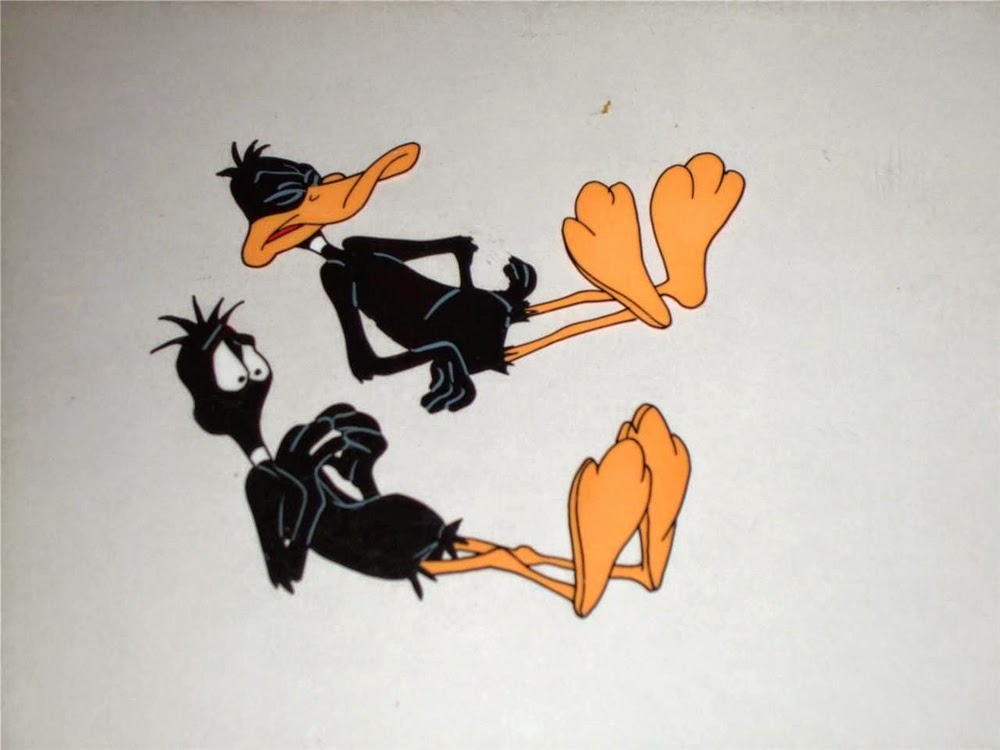 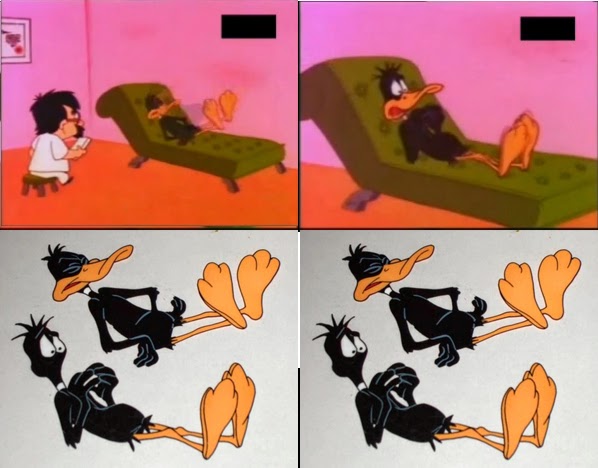 That's all for now, folks!
Posted by Matthew Hunter at 7:12 PM