I recently came across your blog and have really been enjoying the extremely rare content. I especially enjoy looking back at the exclusive merchandise from the Warner Bros. Studio Stores, which is the reason why I'm writing. I've attached photos of a poster sold in the Warner Bros. Studio Store's flagship NYC store (which was located at northeast corner of Fifth Avenue and 57th Street until 2001, in case you're unfamiliar). This poster was a 2-D replica of a five story 'relief' mural running up the wall beside the escalators. The quality of the artwork suggests that this may have been concept art for how the finished piece would look. It incorporates not only the classic Looney Tunes characters, but also several other WB properties. It was sold in the store around it's opening in 1996 (?). 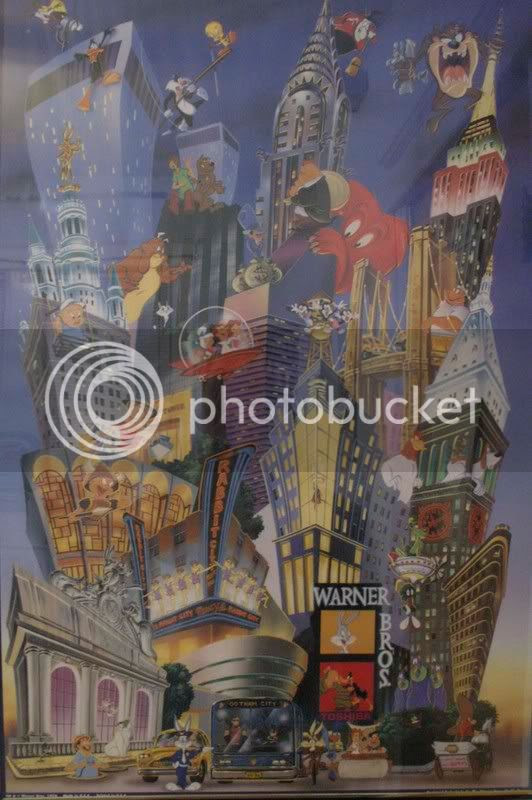 The poster (and it's identical in-store mural) captured many NYC landmarks but with a Looney Tunes twist to some of their respective architectural elements. Some notable details (which may not be clear in the photos) include:

- Foghorn Leghorn's head appears multiple times in place of the eagle gargoyles on the Chrysler Building.

- Bugs Bunny, Beaky Buzzard, Pepe LePew and Fabrette replace the sculptures of Mercury, Hercules and Minerva on the clock over the main entrance to Grand Central Terminal.

-The store itself puts in a nondescript appearance (the signs were left off), but is identifiable by the glass elevator being hoisted by Superman (one of the store's signature attractions). Also, the Warner Bros. and their sister Dot's water tower has been added with the three hanging out of it.

-The Municipal Building, located in lower Manhattan across from City Hall, has had it's statue "Civic Fame" replaced by a golden Wile E. Coyote statute.

-The World Trade Center also appears in the poster. There was a regular Warner Bros. Studio Store within the WTC's mall. Interestingly, and I have no way of verifying this, I've heard that a dust encrusted Bugs Bunny statue was recovered from the ruins of the WTC after 9/11. It is supposedly being stored in a hangar at LaGuardia Airport along with other artifacts that will eventually be displayed in the memorial museum.

I apologize for the quality of the images; it's framed on my wall, so some reflections may make it hard to see detail. Feel free to use them on the blog along with whatever you may want to include from this. Keep up the good work with the blog."

Here are closer looks at each part of the mural poster:

Thanks for the great e-mail, Richard!
Posted by Jon Cooke at 12:02 PM

Bottom left, above Sam Sheepdog...is that Pinky and the Brain?

I can confirm that the recovery of the Bugs statue from the WTC's Studio Store did make headlines during the early clean-up of the September 11 attacks. If I recall correctly, one story on the statue in the press was trying to take a light-hearted tone considering the gravity of the situation, as if to say that Bugs Bunny himself was saved from the rubble.

Ironically, that particular location most likely had already been closed for good before the attacks, as the chain was already closing stores left and right by September 2001. Even the famous 57th-and-5th store was long gone at this point, as the Times Square location had become the new "flagship" store in the company's final year.

You know what I was always in awe of at those Warner Bros. stores? Well, the cels were awesome of course, but as a kid I always wanted all those ron lee looney tunes statues. I got a marvin the martian and a daffy duck. But the one I wanted was this gigantic road runner and coyote desert scene. But it was a few thousand dollars. That new york store was awesome. The top floor had all the best stuff.

I worked for Warner Bros. Studio Stores (WBSS) until the end. The WTC Store was still open at the time of the attacks on the buildings. Bugs was saved and pulled from the rubble, stored somewhere until Warner Bros was able to recover it back to the vaults in Burbank. I have a picture that was taken of the store in ruins but Bugs Bunny managed to survive. I was with them for 10 years and truly miss that company. There will never be such a wonderful place to work with such a great group of people again.

I am the proud owner of the original 3-D artwork of this piece (not the poster). The mural artist did one framed original of this art and I was lucky enough to buy it at a private art show at WB Studio Store in NYC the day it was released. I literally had to beat other people up to the sales counter to buy it. Just thought you fans of this work would be interested in the story.