Super Looney Tunes was a McDonald's Happy Meal promotion from 1991. There were four figures each with a snap-on plastic "costume". Each character was a parody of a character from DC comic books: Bugs was "Super Bugs", Daffy was "Bat-Duck", the Tasmanian Devil was "Taz-Flash", and Petunia Pig was "Wonder Pig". An "under three" toy of Daffy in a soft plastic Batmobile was available as well for kids under three years of age (not shown). The fine print on the bottom of the bag points out that this was an "authorized parody" (DC comics characters, of course, are also owned by Warner Bros.).

Here are the front and back of the Happy Meal bag: 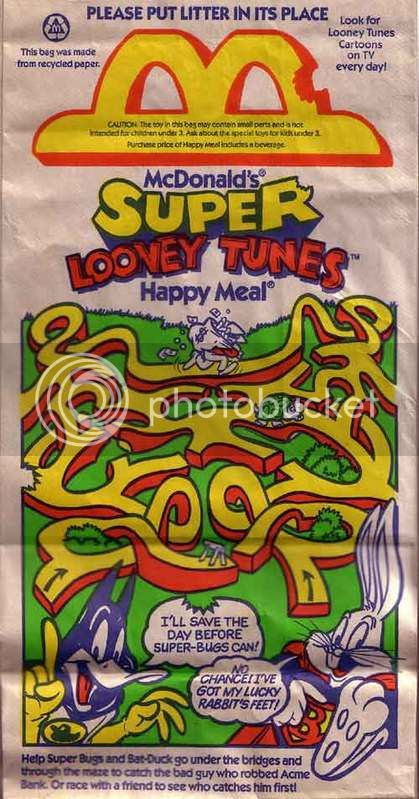 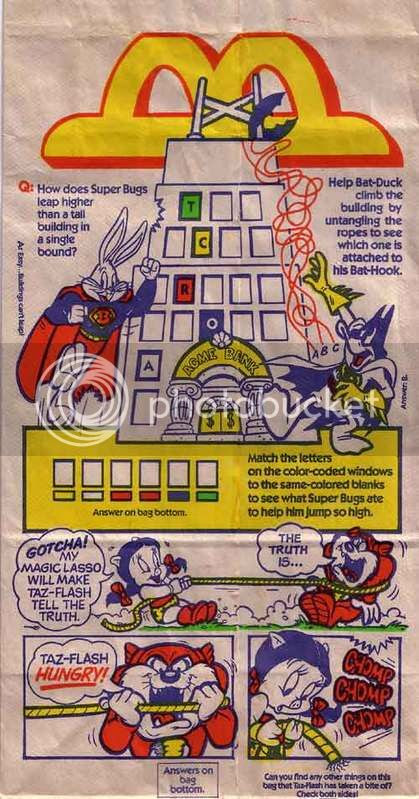 I am sure some TV spots promoting the toys were made but I have no memory of them (and haven't seen them pop up online). I do wonder if WB intended to do anything else with this "Looney Tunes-as-DC Superheroes" concept... I don't think they did anything else besides this single Happy Meal promotion with the idea. The DC superhero spoofing did become a regular schtick of the Tiny Toons, though.

I also wanted to point out a little blurb in the upper right hand corner of that Happy Meal sack... 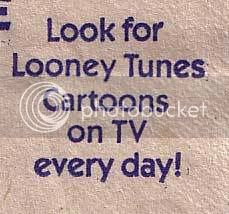 Yes, Looney Tunes were still such a regular sight on television at the time that they didn't even have to mention what channel to tune into! You could pretty much just turn on your TV and find some channel airing Warner cartoons.
Posted by Jon Cooke at 7:26 AM

The character Bat-Duck had a one-shot comic story in an issue of Looney Tunes Magazine.
The team of Super Looney Tunes had a one shot story in another magazine as well where they battled a Lex Luthor/ Elmer Fudd.

You could turn on tv any time of the day basically and Looney Tunes would be on. It constantly ran on nick but it was also on just about every other station. When cartoon network first started, it was actually pretty good. They would show lots of REAL cartoons. Not all this junk that's made specifically for the network. I have wished for years that they would make Cartoon Network Classic station. I also always wanted a gameshow network classic station. But that's another story.
anyway, I want those super looney tunes toys.

I know I have all four of those toys...somewhere. I have so many collectibles and knick knacks I'll probably never find them though. Odd choice to have Petunia Pig there, though.

I remember having these toys as a kid! A set of wrapped up oes may still be sitting in the loft from the old McDonald's toy collecting days! Really need to sort that lot out..

I designed those toys."Odd Choice" Petunia was there because we had to have a female character.

None of it was based on any prior comic book appearances---BATDUCK was part of the original concept: "LOONEY TUNES AT THE MOVIES", which featured Bugs as Indiana Jones ("Indiana Bugs"), Sylvester as Rocky ("Schlocky"), Wile E.Coyote as "Darth Acme",& Elmer as "Wambo".

There was also a Porky/Dick Tracy concept & later Porky as Robin...

The whole concept then evolved into SUPER LOONEY TUNES, since LT & DC were both owned by WB.

PS--there were originally going to be TWO under-3 toys---in addition to the DUCKMOBILE, there was gonna be a rocking SUPERBUGS in flying pose on a cloud...

ALSO--SuperBugs resulted in some changes in the way figures with snap-on costumes were designed after that...the pegs/holes on the super-suit were symetrical, allowing the costume to be put on BACKWARDS...the problem with THAT was the big cape bulge (designed to accomodate his tail)that now appeared at his crotch.

After that, we hadda stagger 'em, so the costumes only oriented the correst way.